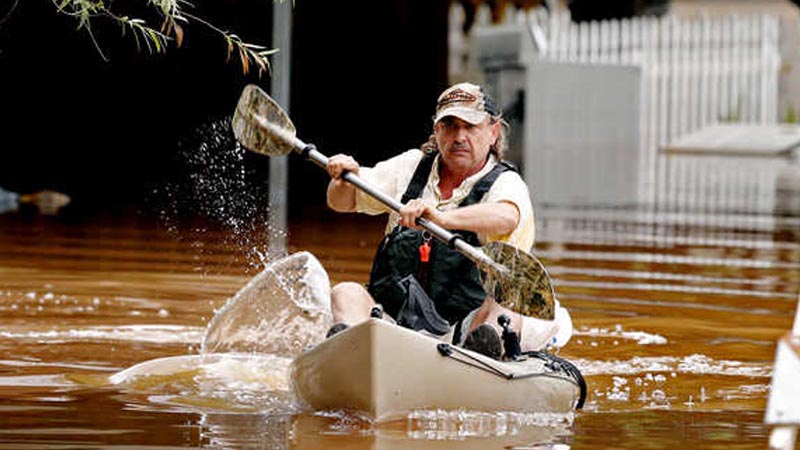 Lexington, Oklahoma resident Michael Williams uses a kayak to retrieve valuables from his mother Karleen Shaw's house. Williams forced his mother from the house after the water level got waist high

Flash flooding and severe storms in Texas forced evacuations, submerged roads and left thousands without power, after an Oklahoma firefighter was swept into a storm drain during an overnight rescue effort and died.

The National Weather Service reported river flooding across southern Oklahoma and central Texas, where six to nine inches of rain fell overnight. The severe weather was moving into Arkansas, Kurt Van Speybroeck, a NWS meteorologist based in Fort Worth, Texas, said.

"They haven't seen flooding like this for probably a good decade, probably more like 25 years, even longer, on some of these rivers," he said, noting that soil in the region is saturated from heavy rainfall over the past three weeks.

"We just can't take any more water," he said.

Evacuations were ordered in parts of Montgomery County, Texas, north of Houston.

Helicopters were used to rescue people off rooftops in Hays County around the central Texas region known as the Hill Country.

More than 1,000 people were rescued or evacuated from 400 homes, county officials reported on Sunday morning.

"Never in our wildest imagining did we think about the wall of water that would some so quickly or cause so much destruction," said Judge Bert Cobb, the top elected official in Hays County, at a news conference.

The county, which includes the small cities of Wimberley and San Marcos, located about an hour's drive north of San Antonio, ordered a Sunday night curfew for residents.

In nearby Luling, Texas, the rising San Marcos River threatened to flood homes, a state park and a golf course, NWS in Austin-San Antonio reported.

Captain Jason Farley, a 20-year veteran of the department, had been responding to a call to help about 10 people trapped in their homes by rising floodwater, said Claremore Fire Chief Sean Douglas.

Another firefighter who rushed to his aid was also swept into the storm drain but survived with minor injuries, he said.

"It is a tragic event and a devastating loss for us," Douglas said. "It will be hard to cope."

In central Texas officials warned that severe flooding from the Blanco River threatened closures of a major highway between San Antonio and Austin, the Texas Department of Transportation said.

Dozens of local streets were closed, and the Red Cross had opened shelters.