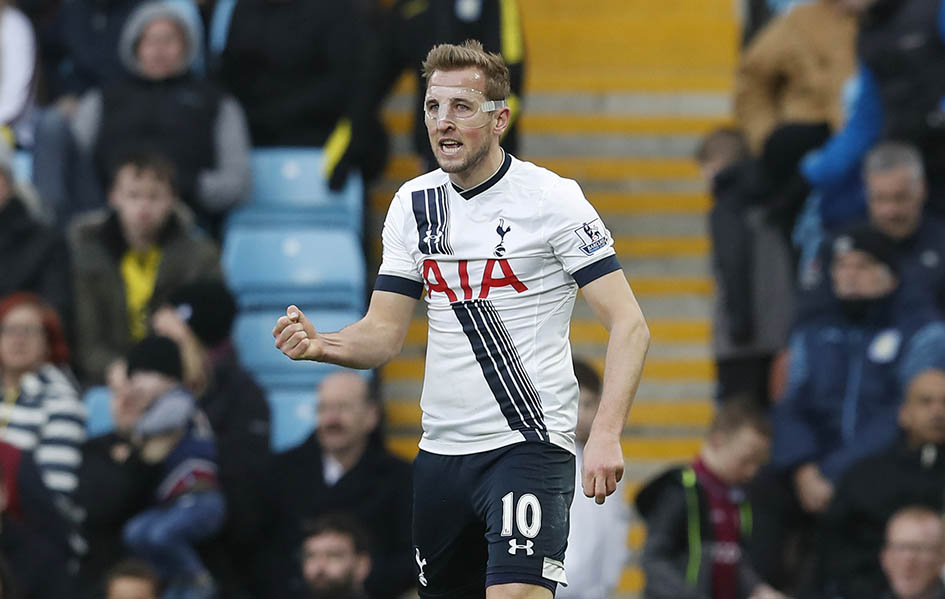 The prolific England striker took his tally to 22 goals for the season by striking either side of half-time at Villa Park as Spurs moved to within two points of leaders Leicester City, who host Newcastle United today.

It was the perfect answer for the doubters at the end of a week in which Mauricio Pochettino's side had squandered a 2-1 lead to draw 2-2 with Arsenal in the north London derby before crashing 3-0 at Borussia Dortmund in the first leg of their Europa League last 16 tie.

"It was a good victory and three important points after a few games that have not been so good," Spurs manager Pochettino told the BBC.

"We need to keep the pressure on and win games. You cannot stop the dream of the supporters and they are right to dream. But we need to work hard."

Kane's England team-mate Dele Alli set up both of his goals, firstly with a quickly taken free-kick on the cusp of half-time and then with a burst down the left wing in the 48th minute.

Spurs exerted pressure on the Villa defence from the outset and should have gone ahead as early as the third minute.

Erik Lamela threaded a pass through to Kane, but while he timed his run perfectly, his chip over the advancing Brad Guzan was too heavy and he watched in anguish as it clipped the top of the bar.

The first threat from Villa came when Jordan Veretout produced a penetrating run down the right, but Rudy Gestede could not make clean contact with his cross.

That was only brief respite for the home side as wave upon wave of Spurs raids led to a succession of clear-cut opportunities to take the lead.

After Christian Eriksen had shot inches wide from distance, Guzan came to Villa's rescue with an instinctive save to keep out a close-range effort from Kane following a cross by Danny Rose.

Tottenham were then left wondering how a goal did not arrive in the 32nd minute as Lamela's first-time shot from a Kyle Walker cross was pushed onto the post by Guzan.

The rebound hit the Villa goalkeeper on the shoulder before Alan Hutton managed to clear the loose ball.

Spurs had been knocking at the door throughout the first half and right on the stroke of half-time, they got the all-important breakthrough.

Alli unlocked the Villa defence with a smart free-kick and Kane forced his way past Jores Okore before firing a low shot beyond the reach of Guzan.

Within three minutes of the restart, Tottenham had gained further reward for their dominance as the Alli-Kane partnership struck again.

The former Milton Keynes Dons teenager ventured forward down the left and his low cross was side-footed into the roof of the net by the ever-alert Kane.

It knocked the stuffing out of Villa and Spurs passed the ball around with relative ease as they probed for another opening.

It seemed almost too easy when Lamela broke to the edge of the box, but his eventual shot lacked the sting or direction to trouble Guzan.

A burst down the left by Rose teed up an opportunity for Eriksen to try his luck from long range again, but his left-foot volley was high and wide.

Villa's torment was heightened by two glaring misses in the closing stages as Gestede hit the underside of the bar from point-blank range before Joleon Lescott somehow contrived to miss from a similar position moments later.

"The result is not positive, but for sure the attitude and commitment for the 90 minutes was better than in previous weeks," said Villa manager Remi Garde, whose side are nine points adrift of safety.