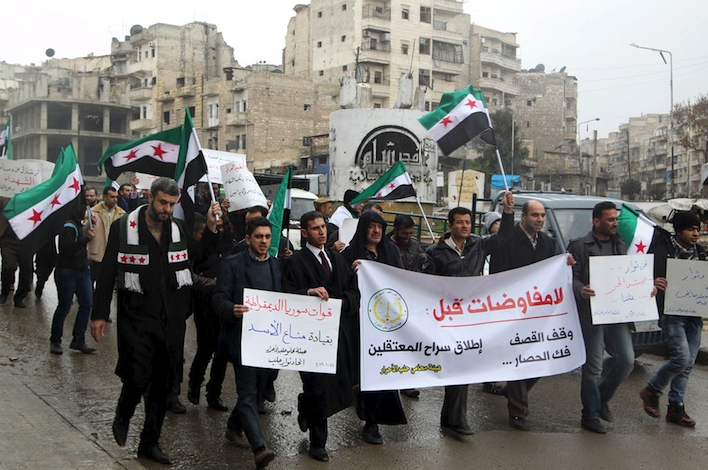 Residents carry banners and opposition flags as they march during a protest in Aleppo, asking for the release of prisoners held in government jails and lifting of the siege on besieged areas, in the Al Fardous neighbourhood of Aleppo. (Reuters File Photo)

Geneva: Syrian activists and Western envoys said Syria's President Bashar Al Assad and others should face justice for war crimes as part of any peace process.

They also called for the release of tens of thousands of detainees languishing in government jails, including women and children, as part of confidence-building measures in the Geneva talks between the Syrian government and opposition.

They were speaking at the Swiss Press Club in Geneva alongside an exhibition of some of the 55,000 photographs taken by a former military police photographer code-named "Caesar" which document the torture and deaths of detainees in Syrian state custody.

"The Caesar photos are compelling evidence, brutally and forensically documented, of the Assad regime's calculated widespread attack on the Syrian people. It is a form of collective punishment," Gareth Bayley, UK Special Representative for Syria, said in a speech.

"Justice focuses most specifically of course on Bashar Al Assad," he said. "Accountability must be central to a settlement in Syria."

Bayley, referring to the opposition High Negotiations Committee (HNC), said: "We support today the HNC's call, which is both profound and indeed noble, for the release of detainees."

But he said the Caesar photos should be used as evidence in national criminal prosecutions. "Our call is to all countries to try whatever procedures they have to exercise their national jurisdiction."

US Special Envoy for Syria Michael Ratney attended the exhibition but did not speak.

UN war crimes investigators have documented atrocities committed by all sides in the war, now in its sixth year, and have compiled a confidential list of suspects.

On Tuesday they said lower-level perpetrators should be prosecuted by foreign authorities until senior military and political figures could be brought before international justice.

"Unfortunately all UN resolutions about Syria have no mention at all about accountability," said Mazen Darwish, a prominent Syrian activist released in August after serving 3-1/2 years in prison on charges of spreading propaganda.

"Without any justice we don't have any peace in Syria. And justice is about accountability," said Darwish, founder of the Syrian Centre for Media and Freedom of Expression.

Yahya Al Aridhi of the Syrian Organisation for Victims of War, organisers of the exhibition, said the bodies depicted in the gruesome photographs were those of Syrians, Jordanians and Palestinians who had opposed the regime.

"They are victims of a non-stop Holocaust in Syria," he said.