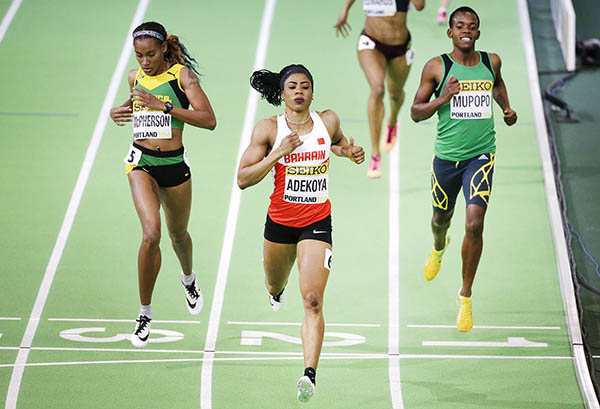 Bahrain’s Adekoya races to victory in the women’s 400m

PORTLAND, Oregon: Bahrain’s Oluwakemi Adekoya held off a pair of fast closing Americans to win the women’s 400m on Saturday at the World Indoor Championships.

But the highlight of the day was American Ashton Eaton who successfully defended his  heptathlon title to complete a husband-and-wife golden double that the couple will aim to repeat at the Rio Olympics.

After Canadian Brianne Theisen-Eaton won the pentathlon on Friday, Eaton followed suit by posting a winning total of 6,470 points, the sixth highest ever to make them the first married couple to win golds at the same world championships.

“I was thinking it doesn’t matter what happens to me today,” said Eaton, who was born and lives in Portland. “Brianne is the one that stole the show.

“I am really happy about that and proud of her,” he added of the Canadian, who finally ended a frustrating run of second-place finishes at major championships.

With one day remaining in the championships, the US is the runaway leader at the top of the medal table with 15, including eight golds. No other country has more than one gold or three medals.

The hosts have also benefited from Russia’s absence after the traditional powerhouse were banned from international competition when a World Anti-Doping Agency (Wada) investigation uncovered evidence of what it termed state-sponsored doping.

Eaton began the second day with a 63-point cushion after four events and quickly added to his advantage, posting the best time in the 60m hurdles and top height in the pole vault to extend his overall lead heading into the 1,000m.

With his world record out of reach, Eaton cruised home in third place for a comfortable 288-point win over Ukraine’s Oleksiy Kasyanov.

Also contributing to a golden evening for the US was Boris Berian, who two years ago was working at a fast-food outlet but on Saturday was standing on top of the podium after grinding out a victory in the men’s 800m in one minute, 45.83 seconds.

In the women’s shot put, American Michelle Carter captured gold on the last attempt of the evening with the longest throw in the world this year of 20.21m.

Venezuela sent one athlete to the world championships and made it count, 20-year-old Yulimar Rojas returning home with the gold medal in the women’s triple jump.

Italy’s Gianmarco Tamberi maintained his tradition of shaving off half his beard for good luck as he secured gold in the high jump with a winning leap of 2.40m.

“What changed more was in the mind,” said Tamberi. “After I was going for my third attempt, I tell myself, OK technically you are OK but you have to jump it, so jump please.

“You have to push, fight, jump.

“When it was third attempt, every time I say in my mind you have two choices give up or fight,” said Tamberi, hugging his fellow medallist and barely able to sit still at the news conference.”