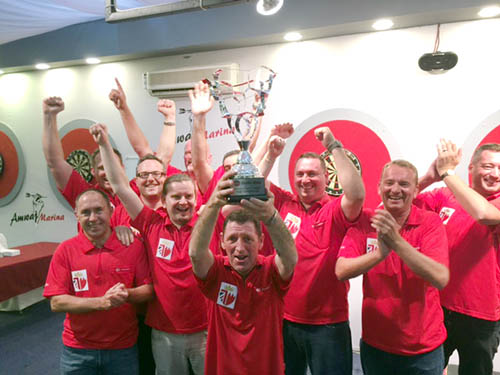 The third-place winners were Gulf Air Darts Team who triumphed to a 6-5 victory over Falcons A.

The best player of the league was Falcons A’s Bassem Mahmood who combined a total of 75 single game points and 30 double games point with a winning average of 88.24 per cent averaging a total of 272.65 points to lead the ranks.

His closest opponent was Gareth from the British Club Darts team who managed a total point score of 189.75.

Talal Al Gaith from the Wolf Pack Tracks Team managed the most 180 winners, getting them six times while the High Finish Star was his team mate Talal Al Zayani with 160 checkouts.

The league, which kicked off on November 9, was played weekly on a home and away basis, at Amwaj Marina Club, British Club, golden Tulip Hotel, Bahrain Yacht Club, The K Hotel and Tracks Outlet at Crowne Plaza Hotel.

The group stages had seen Falcons A lead the standings with 27 points from 15 games while Gulf Air Darts Team had finished second with 25 points from the same number of games.

Second-placed Filipino Darts team had qualified to the semifinals after ending the group stages with 24 points from 15 games while champions British Club Darts Team were in fourth place with 23 points from the same number of games.

The first edition of the league was the 2013/2014 season which saw BFC Ez Remit – Filipino Darts Team get crowned as champions.

The 2014/2015 saw the team change their sponsor and go on to win the title again as the Filipino Darts Team.