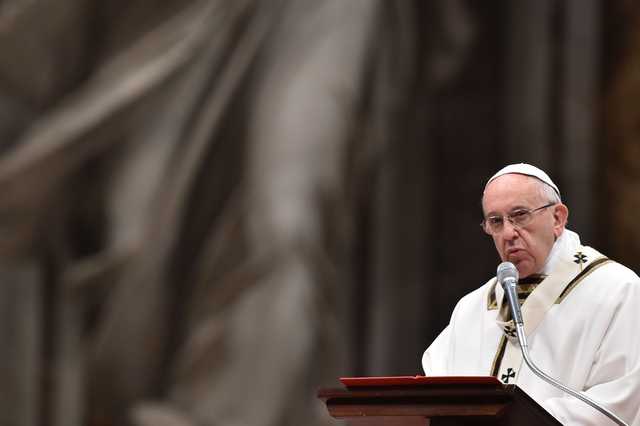 Pope Francis washed the feet of 11 young asylum seekers and a worker at their reception centre to highlight the need for the international community to provide shelter to refugees.

Several of the asylum seekers, one holding a baby in her arms, were reduced to tears as the 79-year-old pontiff kneeled before them, pouring water over their feet, drying them with a towel and bending to kiss them.

It was a "fraternal" gesture which sharply contrasted with the "gesture of war, of destruction committed three days ago in a European city" by "people who do not want to live in peace," the pope said in a reference to deadly suicide bombings in Brussels claimed by the Islamic State (IS) group.

"Behind that gesture... there are arms traffickers, who want war, not fraternity", Francis said at the centre of Castelnuovo di Porto, north of Rome, in an improvised homily.

Those picked for this Easter ritual were four Nigerian Catholics, three Eritrean Coptic women, three Muslims from Mali, Pakistan and Syria and a Hindu Indian, as well as an Italian worker from the centre.

"We are all brothers and we want to live in peace," the pontiff said at the open-air, windblown mass in the courtyard of the reception centre, one of the largest in Italy.

The centre, run by the Italian interior ministry, houses 892 people from 25 countries, including 36 women and seven minors.

Francis has long called for the global community, and Europe in particular, to open its doors to refugees and step up the fight against xenophobia.

Thursday's ceremony is part of the run-up to Easter Sunday, and has seen the Argentine pontiff in the past wash the feet of prison inmates and disabled people.

Shortly after his election in 2013, Francis visited a youth detention centre where he performed the ritual on a group of young inmates including two Muslims – the first Catholic leader ever to do so.