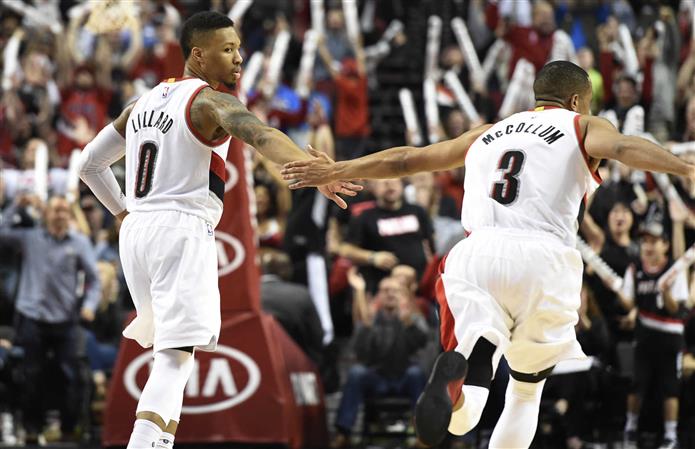 One night after being ejected in the fourth quarter for arguing a call, DeMar DeRozan scored 11 of his game-high 23 points in the third quarter to lift the Toronto Raptors to a 115-91 victory over the New Orleans Pelicans Saturday night at the Smoothie King centre.

In snapping a two-game road losing streak, the Raptors (49-23) matched their franchise record for most victories in a season, with 10 games remaining. The Raptors have increased their win total in each of the last five seasons.

LeBron James recorded the 42d triple-double of his career and second in a week, leading the Cleveland Cavaliers to a 107-93 win over the New York Knicks on Saturday at Madison Square Garden.

Brook Lopez scored 14 of his 23 points during the fourth quarter and the Brooklyn Nets rallied for a 120-110 victory over the Indiana Pacers Saturday night.

Lopez was 2-of-9 shooting as the Nets trailed by 14 early in the second quarter and faced a 93-85 deficit going into the fourth quarter. He helped the Nets get the lead, hitting a short jumper for a 106-102 lead with 4:26 remaining and then made plays at both ends down the stretch.

centre Dewayne Dedmon scored a career-high 18 points and grabbed a season-high 13 rebounds in leading the Orlando Magic to an easy, 111-89 victory over the hapless Chicago Bulls.

The Magic (30-43) snapped a six-game losing streak. The Bulls (36-36) lost their third consecutive game as their once-legitimate playoff hopes continued to fade.

Paul Millsap had 23 points, nine rebounds and five assists and the Atlanta Hawks snapped the Detroit Pistons' five-game winning streak with a 112-95 victory at The Palace.

Kent Bazemore contributed 17 points and Al Horford added 13 points, five rebounds and five assists for the Hawks (44-30), who extended their Southeast Division lead to one game over Miami.

Gordon Hayward scored 16 of his 18 points in the fourth quarter and the Utah Jazz beat the Minnesota Timberwolves 93-84 Saturday night.

Derrick favors scored 19 points for Utah, which went 3-2 on a season-long five-game road trip. The Jazz have won seven of nine. Rodney hood had 15 points, Trey Lyles had the same amount off the bench and Rudy Gobert had 11 rebounds.

Kevin Durant scored 31 points, Russell Westbrook had 29 and the Oklahoma City Thunder stretched their winning streak to seven with a 111-92 victory over the San Antonio Spurs on Saturday night at Chesapeake Energy Arena.

The Thunder, who had won their past six games by an average margin of more than 16 points, took advantage of the Spurs resting four of its five regular starters.

Isaiah Thomas scored a game-high 28 points in his return to Phoenix and the Boston Celtics, after squandering a 21-point lead, held on to beat the Suns 102-99 Saturday night.

Devin Booker capped an 8-2 run with a step-back jump shot that pulled Phoenix within 98-97 with 1:16 remaining. Booker had a chance to give the Suns the lead on their next possession, but his 20-footer bounced off the back of the rim.

The Portland Trail Blazers got some revenge and a valuable victory in the NBA playoff chase on Saturday night, defeating the Philadephia 76ers 108-105 at Moda centre.

But it was anything but easy.

Guard CJ McCollum's 25 points led five Trail Blazers in double figures in a near wire-to-wire win that got scary in the fourth quarter after the Sixers came from 16 points down to take the lead.

Nicolas Batum's 25 points propelled the Charlotte Hornets to a 115-91 victory over the Milwaukee Bucks Saturday night at the Bradley centre.

Charlotte forward Marvin Williams buried four 3-points as he kicked in 21 points on 8-of-12 shooting while point guard Kemba Walker added three more to finish with 18.