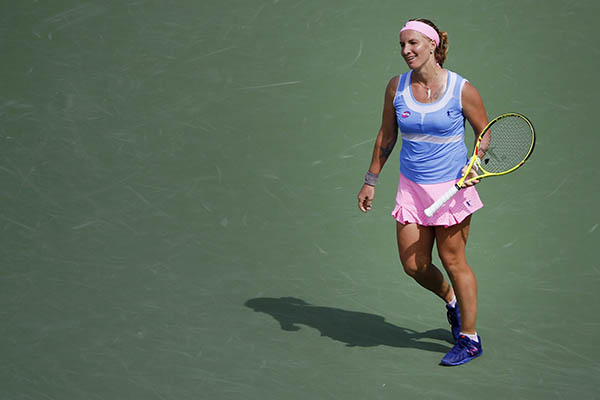 Williams fired 13 aces and 43 winners but also made 55 unforced errors, prompting questions about her fitness and movement that irked the 21-time Grand Slam champion.

“I don’t think it’s appropriate to criticize my movement right now,” Williams said. “I did the best I could. I can’t win every match. These players come out and give their best. I have to give 300 percent every match.”

The 34-year-old American was seeking her ninth Miami crown but instead matched her earliest-ever exit from 2000 with a fourth-round departure at the ATP and WTA hardcourt event.

“It’s obviously disappointing, but I have won here a lot, so it’s OK,” Williams said.

Williams, who said she was physically fine and not affected by the heat and humidity, arrived having lost back-to-back finals for the first time since 2004, falling to Germany’s Angelique Kerber at the Australian Open and Belarus’ Victoria Azarenka at Indian Wells.

Adding the upset only increases the intensity as she prepares to defend French Open and Wimbledon crowns in the next few months.

For 30-year-old Kuznetsova, a two-time Grand Slam champion who lost eight of 10 prior matches to Williams, it was turning back time to when she won the 2006 Miami title.

“I’m really happy with my performance,” Kuznetsova said. “I had to stay within my game and put a lot of balls back into the court and I did that really well today.”

After an exchange of early first-set breaks led to a tie-breaker, Williams jumped ahead 4-1, aided by two aces and a service winner, and took the last three points on an overhead smash, a service winner and a forehand winner.

Kuznetsova held at love to open the second set and forced Williams to save three break points in the second game, finally breaking for a 3-1 edge when Williams netted a backhand.

Kuznetsova saved two break points in the fifth game, Williams double faulted away a break in the sixth and Kuznetsova held at love in the seventh to force a third set.

Williams was humbled in the third from the start, being broken at love in the first game and by a backhand service return winner in the third on the way to losing in two hours and three minutes.

Radwanska, the 2012 Miami champion and Wimbledon runner-up who lost to Williams in the Australian Open semi-finals, faded in the second set as well to Bacsinszky, a 2015 French Open semi-finalist.