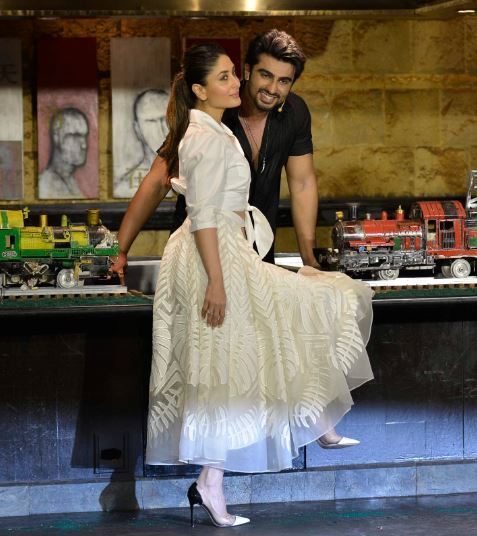 Writer and director R Balki revels in working with unconventional themes within a mainstream narrative framework.

His fourth film Ki & Ka is a romantic comedy that is nothing if not unusual.

But in terms of quality, it tilts more towards Balki's disastrous Shamitabh than either Cheeni Kum or Paa, both of which were critical and commercial successes.

This story of a son of a real estate tycoon who opts to be a stay-at-home hubby while his wife pursues a corporate career is full of potential owing to its uniqueness.

However, neither the writing nor the overall execution measures up to the demands of the off-kilter story.

Ki & Ka is refreshingly clutter-free because it sticks to a single-line plot all the way to the bitter end.

But owing to the cookie-cutter approach that Balki adopts to the question connubial rights and duties, the film eventually has little to offer by way of genuine insight into a reversal of gender roles in marriage.

The two principal characters are reduced to caricatures as they strive to make their marriage work. It is of course easier said than done because the duo has nothing in common except a birthday and a home.

The man (Arjun Kapoor) turns his back on his dad's wealth because he is averse to the rat race he would be pushed into if he took over the family business.

The woman (Kareena Kapoor Khan), three years older and presumably wiser, wants to achieve success as a marketing pro and quickly at that.

They hit it off well and decide to get married. It is smooth sailing for a while as the husband plays homemaker to perfection, taking care of his apartment, his wife and his mother-in-law with equal zeal.

Complications arise when he turns into a celebrity as a speaker on gender equality, as a result of which man and wife are pulled in opposite direction.

As an idea, this role-reversal drama has commendable connotations in the societal context. But for it to be taken to a logical, coherent conclusion as a storyline, the basic requirement would have been a screenplay far less contrived than the one that the film is saddled with.

The lead actors try their best, but that isn't good enough to offset the rather unconvincing nature of the tribulations that their characters are made to confront.

These two unlike poles are in a demanding relationship simply because they are deeply in love with each other.

Arjun and Kareena are required to project a great deal of physical passion the two constantly hug, kiss and give free rein to public and private displays of affection but they are unable to scorch the screen with their presence.

Watch out for Amitabh and Jaya Bachchan playing themselves and sportingly putting a part of their lives up for scrutiny and injecting some life into the film.

Ki & Ka is technically perfect, with director of photography P C Sreeram delivering pretty frames all the way through. Unfortunately, over-refinement robs the film of soul.

Ki & Ka seeks to put a fresh spin on the man-woman relationship, but the well-meaning exercise is disappointingly effete for it is unable to shrug off its lackadaisical shell.