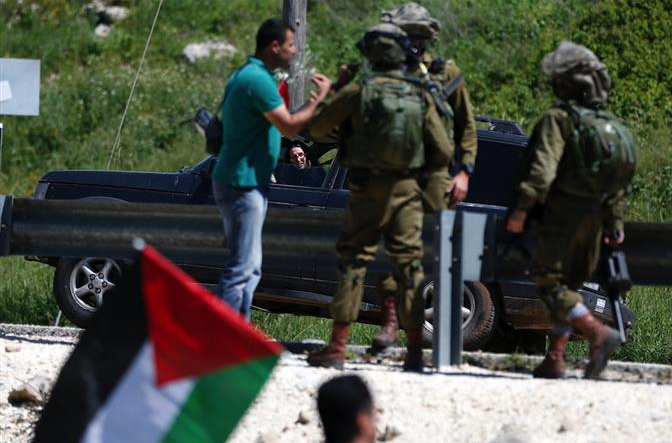 A driver looks on as a Palestinian man scuffles with Israeli soldiers during clashes following a march. (AFP Photo)

Jerusalem: An Israeli soldier caught on video shooting and killing a wounded Palestinian assailant will be held under arrest on base until his next court appearance, a military court ruled.

A new hearing of a military appeals court is scheduled for Tuesday, the army said in a statement.

The decision to place the soldier under arrest at his base is seen as less serious than holding him in a military prison.

It follows a favourable ruling on Thursday, when military prosecutors announced that the 19-year-old soldier would be investigated for manslaughter, rather than murder.

Under Israeli law, manslaughter signifies an intentional but not premeditated killing.

Video of the soldier, whose identity is under a gag order, shooting the Palestinian in the flashpoint West Bank city of Hebron on March 24 spread widely online.

Filmed by a Palestinian volunteer for Israeli rights group B'Tselem, it showed a 21-year-old Palestinian – who along with another man had allegedly stabbed a soldier minutes earlier – lying on the ground, apparently after being shot.

The soldier then shoots him in the head without any apparent provocation. The Palestinian, Abdul Fatah Al Sharif, was killed.

Top military and government officials have strongly condemned the soldier's behaviour, but far-right politicians and protesters have reacted angrily to his arrest and demanded his release.