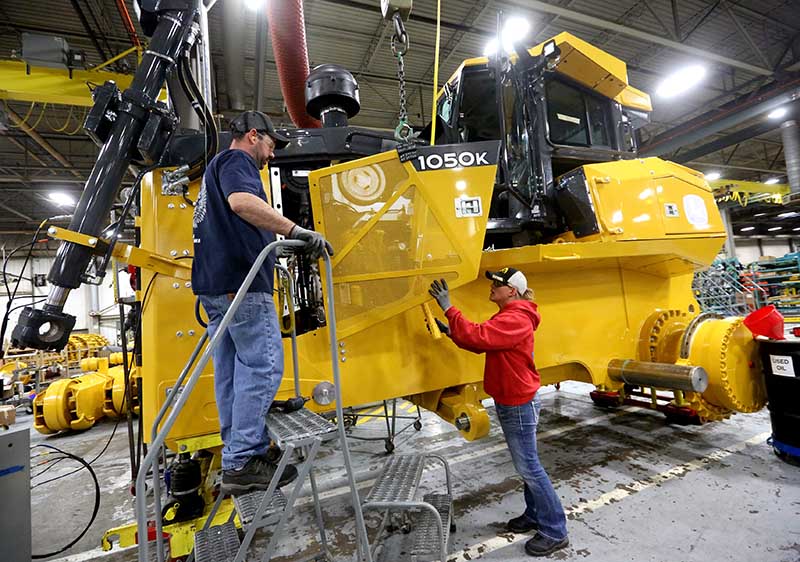 Workers attach a panel to a John Deere 1050K Crawler Dozer at its plant in Dubuque, Iowa ... manufacturing grows

Washington: US employment increased solidly in March and wages rebounded, underscoring the economy’s resilience, but the Federal Reserve is expected to remain cautious in raising interest rates this year due to slowing global growth.

Average hourly earnings increased seven cents. While the unemployment rate rose to five per cent from an eight-year low of 4.9pc, it was because more Americans continued to return to the labour force, a sign of confidence in the jobs market.

March’s strong employment report will likely have little impact on monetary policy in the near-term, with the Fed appearing to be more focused on international developments.

Economists had forecast non-farm payrolls increasing 205,000 in March and the unemployment rate holding steady at 4.9pc.

Economists say wage growth of between 3pc and 3.5pc is needed to lift inflation to the Fed’s 2pc target. Though the Fed’s preferred inflation measure is currently at 1.7pc, Fed chair Janet Yellen has expressed scepticism over the sustainability of gains, citing transitory factors.

The labour force participation rate, or the share of working-age Americans who are employed or at least looking for a job, rose a 10th of a percentage point to 63pc in March, the highest level since March 2014. It has increased 0.6 percentage point since dipping to 62.4pc in September.

A broad measure of unemployment that includes people who want to work but have given up searching and those working part-time because they cannot find full-time employment rose to 9.8pc last month from a more than seven-and-a-half-year low of 9.7pc.

Employment gains in March were broad-based. But manufacturing lost 29,000 jobs, the largest number since December 2009, despite signs of stabilisation in the factory sector.

US manufacturers expanded in March, ending a five-month streak of declining factory activity.

The Institute for Supply Management said yesterday that its manufacturing index rose to 51.8 last month from 49.5 in February. Any reading above 50 signals growth.

New orders and production improved, but the measure of employment at manufacturers contracted in a sign that factories are letting workers go.

Of the 18 industries in the report, a dozen reported growth. Factories in primary metals, food, electronics and plastics and rubber products, among others, viewed conditions as improving.

Other manufacturing indicators have created a hazy outlook for the sector.

US manufacturing output rose 0.5pc in January, as car, furniture and food production advanced, the Fed reported earlier. But the Commerce Department found in a separate report a stiff 2.8pc decline during February in orders for long-lasting, durable goods.