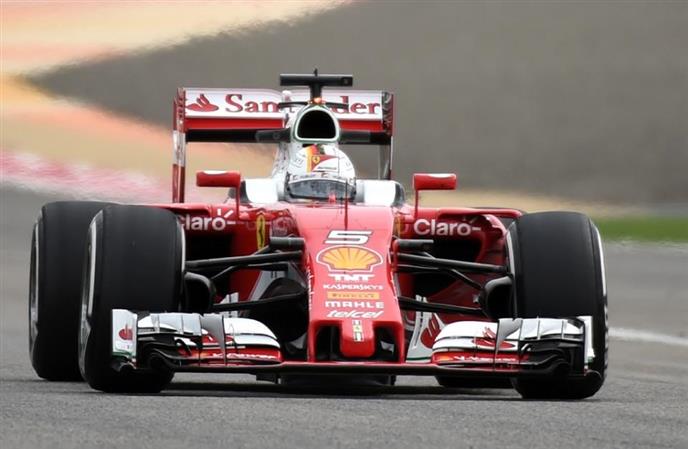 Manama: Sebastian Vettel topped the times ahead of his Ferrari team-mate Kimi Raikkonen in Saturday's third and final free practice ahead of the Bahrain Grand Prix.

On a hot day in the desert, the four-time champion ended Mercedes' domination at the desert track with a best lap of one minute and 31.689 seconds.

This lifted him 0.040 seconds clear of Finn Raikkonen who is seeking a first win at the Bahrain International Circuit where he has seven times appeared on the podium.

The Ferrari resurgence pushed the two Mercedes men down to third and fourth with Nico Rosberg and defending champion Lewis Hamilton four-tenths off the leading pace.

Rosberg had been fastest ahead of Hamilton in both sessions on Friday, but the hotter weather changed the track conditions in Ferrari's favour.

Valtteri Bottas was fifth fastest for Williams ahead of Frenchman Romain Grosjean, who impressed again in the new Ferrari-powered Haas car.

Russian Daniil Kvyat was seventh for Red Bull ahead of Mexican Esteban Gutierrez in the second American Haas car, Felipe Massa in the second Williams, sporting a new shorter nose section, and Australian Daniel Ricciardo in the second Red Bull.

After the cool conditions on Friday, final practice was run in more familiar weather with a vast blue sky, sunshine and an air temperature of 26 degrees Celsius. The track temperature at the Bahrain International Circuit was 38 degrees.

Following the verbal interventions of commercial chief Bernie Ecclestone on Friday, the president of the sport's ruling body, the International Motoring Federarion (FIA), Jean Todt held a pre-session news conference at which he was questioned closely on the new format qualifying fiasco at the season-opening Australian Grand Prix and the uncertainty surrounding its future.

The Frenchman said he hoped for unanimous support for a possible revision to the format as likely to be proposed at a meeting on Sunday morning.

Todt said his favoured option was to retain the progressive elimination system in Q1 and Q2, but to revert to the former method for Q3.

"I am optimistic about this," he said.

Once the action began, Ricciardo was the first driver to set a flying lap time after 10 minutes before being overhauled by Perez and then the two Mercedes men with identical times.

Bottas and then Raikkonen took over at the top of the times, the flurry of action confirming the teams' anxiety to make the most of the changed conditions.

McLaren, whose boss Ron Dennis had applied unsuccessfully for two-time champion Fernando Alonso to drive, despite failing a medical test on Thursday, were left frustrated when his replacement Belgian Stoffel Vandoorne was delayed because of an oil leak. He ended up 19th, one place behind team-mate Briton Jenson Button.

"It is a complete decision by the doctors," said Todt, when asked about the FIA decision to reject McLaren's plea.

"It is something that I discussed yesterday with the president of the medical commission, Gerard Saillant, and, probably, we should make one step forward in a deeper check after such an accident.

"Maybe something we need to think about is to make sure that the driver is followed very carefully for two, three or four days after such an incident.

"But from what I understand, it is a very wise decision (to not allow Alonso to race) and the doctors will never consider giving an authorisation unless all the evidence is very clear to them."

The session was busy, but without major incidents other than two punctures suffered by Spaniard Carlos Sainz of Toro Rosso and Briton Jolyon Palmer of Renault.