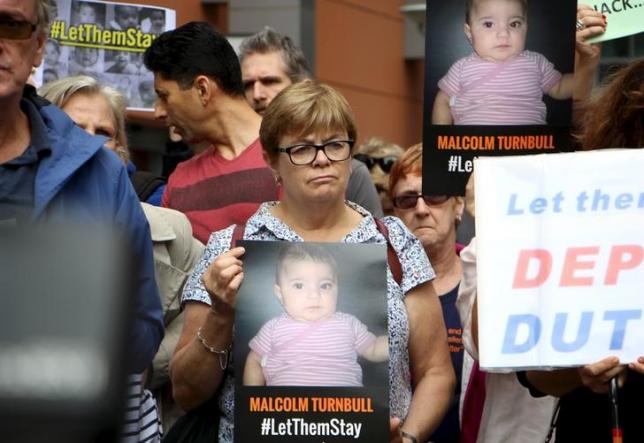 Activists hold placards and chant slogans as they protest outside the offices of the Australian Immigration Department in Sydney, Australia, February 4, 2016. (Reuters File Photo)

Sydney: The last asylum-seeker children in Australian mainland detention have been freed, the government said Sunday, although dozens of others are still being held on the remote Pacific island of Nauru.

Under Canberra's harsh immigration policy, asylum-seekers who try to reach Australia by boat are turned back or sent to Pacific camps in Nauru and Papua New Guinea where they are held indefinitely while their refugee applications are processed.

They are blocked from resettling in Australia even if found to be refugees.

Canberra has been under pressure from rights groups to release children from the centres, with doctors and whistleblowers saying the detention of asylum-seekers has left some struggling with mental health problems.

"We've succeeded since the change of government (in September 2013) not only in stopping the boats but we've also succeeded... that there are now no children who'd arrived unlawfully by boat in detention," Australian Prime Minister Malcolm Turnbull told Sky News.

"It's always been a goal of the immigration minister... to get kids out of detention."

The announcement means the children have been moved to community detention, where asylum-seekers waiting for their refugee applications to be processed live within the community. They are usually allowed to move around freely.

Detention levels for asylum-seeker children in immigration centres have fallen from a record number of almost 2,000 in June 2013.

Meanwhile, another 50 children were still being held at the Nauru camp, according to the latest figures from Australia's immigration department, although the Pacific government said in October the asylum-seekers there are free to roam around the tiny nation.

The announcement came as refugee advocates said the 267 asylum-seekers due to be deported to Nauru following a court ruling in February were still in Australia in what they claim as a success for their #LetThemStay campaign.

The asylum-seekers, including children, had been brought to Australia from Nauru for medical treatment.

There have been numerous protests against the deportations under the #LetThemStay campaign, with Australian church leaders also vowing to defy the government's immigration rules, offering sanctuary to the asylum-seekers.

Turnbull said the government's policy of not allowing asylum-seekers who arrived by boat to settle in Australia had not changed.

"That is why as part of our exercise we are working with other countries in the region who are on Nauru or indeed (PNG's) Manus so that they settle somewhere else," the prime minister said.