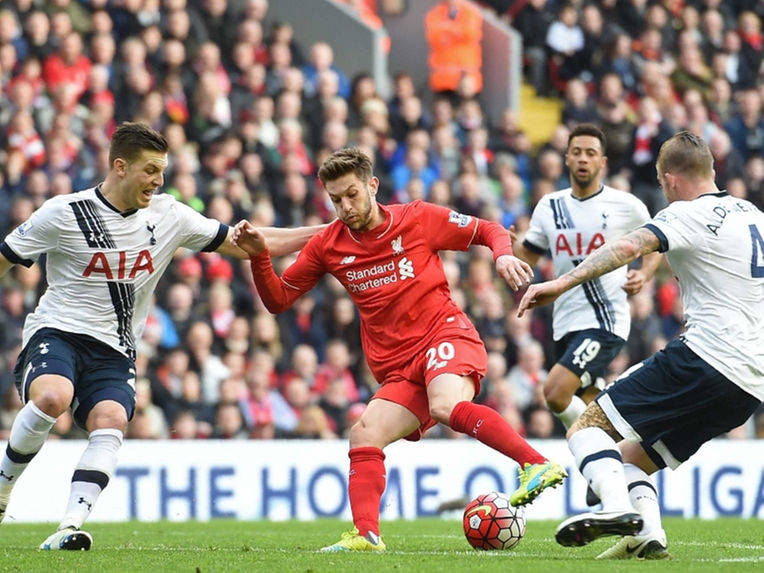 Tottenham Hotspur missed out an opportunity to close the gap to legaue leaders Leicester City to two points after a 1-1 draw with Liverpool. (AFP Photo)

Liverpool: Mauricio Pochettino was disappointed at seeing his Tottenham Hotspur side squander two points in an entertaining 1-1 draw at Liverpool but insisted they must still believe they can overtake Premier League leaders Leicester.

With Leicester not in action until 24 hours later, second-placed Spurs, bidding to be crowned champions of England for the first time since 1961, could have cut the deficit at the top of the table to two points had they won at Anfield on Saturday.

But Philippe Coutinho put Liverpool ahead and it required Harry Kane's 22nd league goal of the campaign to rescue even a point for the north London club from their visit to Merseyside.

"I know they have a very tough game tomorrow (Sunday)," said Pochettino before Leicester took on Southampton, the club he managed before moving to White Hart Lane.

"There are six games ahead of us and four points (between Spurs and Leicester) now so we need to believe.

"In football all can happen," the Argentinian added.

"It was difficult to come here and try and win the three points but we were calm and believe in our quality. We feel disappointed but we still need belief.

"To be honest, I hope that Southampton can pass (beat Leicester) and leave it at four points like now.

"This is my interest as a head coach but then we need to prepare the game and believe, because it is up to us," he added ahead of Tottenham's next match, at home to Manchester United on April 10.

This current weekend represents the final occasion in the present season when Leicester play a game after Tottenham.

Over the next four weekends, Leicester will play before their closest rivals, prior to the concluding two Premier League weekends of fixtures, all of which kick-off simultaneously.

"You never know," said Pochettino when asked if playing ahead of Spurs gave Leicester an advantage. "You cannot guess what will happen in the future but always the most important thing is to be focused on your game.

England international Kane has now set a new club record for goals in a Premier League season, although the prolific forward was predictably more interested in the result of the game and its impact on the title race.

"Of course it's a great achievement and one that I'm very proud of," he said. "As a striker you want to score goals in every game you play in.

"So to get another goal today is nice -- but they feel even better when you get the three points. It's good to get us back in the game and it would be nice to go on and win it."

Liverpool manager Jurgen Klopp, joked he said "something nice" to Kane as he hugged the Tottenham man on the final whistle before paying tribute to his own goalscorer in Coutinho.

The Brazilian was booked for simulation by referee Jon Moss after diving under a challenge from Toby Alderweireld, although his manager had sympathy for the forward.

"It is a good rule that I have to wait half an hour after the game before I can talk to the referee if I want to.

"But he (Coutinho) is in a full sprint and he falls, if he (the referee) doesn't want to give a free-kick, we have to accept it. But it is two decisions, not a free-kick (and a booking).

"But you are experienced enough to write what you think," the German told reporters.

"Phil is a genius player. But I really don't like that you always pick players out. Football is a team game. If you want to play alone, you have to pick a different game.

"We need this. It is about his talent and his potential. We have to want that we always play like this. When everyone plays at his best, imagine how good we could be."