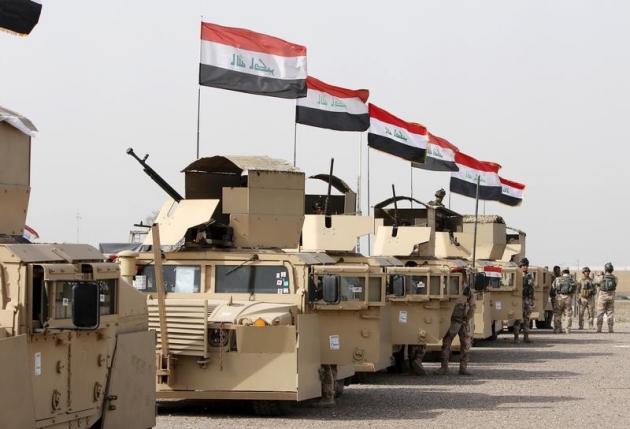 Iraqi security forces ride in vehicles travelling to Mosul to fight against IS at an Iraqi army base in Camp Taji in Baghdad. (Reuters Photo)

An Iraqi army offensive touted as the first phase of a campaign to recapture the northern city of Mosul from Islamic State has been paused until more forces arrive to hold ground, the commander in charge said on Wednesday.

Almost three weeks into the operation, Iraqi forces have retaken just three villages from IS in the Makhmour area, which is set to be a key staging ground for a future assault on Mosul, around 60km further north.

The faltering start has cast renewed doubt on the capabilities of the Iraqi army, which partially collapsed when IS militants took around a third of the country in 2014.

Major General Najm Abdullah Al Jubbouri, who is in charge of the offensive, said that Iraqi forces were now waiting for the arrival of federal police units and additional local tribal fighters to hold territory after it is retaken.

That would free up his forces to go on the offensive against the insurgents, Jubbouri said in a statement, dismissing what he described as efforts to disparage the army. "We do not want to use all our units to hold territory," he said.

The initial target of the latest offensive was Qayara – an IS hub on the western bank of the Tigris river – but Iraqi forces have so far failed to recapture the hilltop village of Nasr on the eastern side.

In the statement, Jubbouri said the militants had dug a network of tunnels beneath Nasr and prepared suicide bombers and a fleet of vehicles rigged with explosives, some of which contain weaponised chlorine, a chemical weapon Islamic State has used before in northern Iraq.

US Army Major Jon-Paul Depreo, operations officer for the international coalition fighting Islamic State in Iraq and neighbouring Syria, said at the weekend the insurgents were determined not to lose Nasr because of its strategic position on high ground.

Depreo also said difficult terrain meant it was not possible to deploy a large number of forces there against the militants, who are more familiar with the area.

"These (Iraqi army) forces aren't from that area necessarily, so they're learning the area," Depreo said.

The coalition, led by the United States, has trained thousands of Iraqi police and soldiers in preparation for the operation to retake Mosul – by far the largest city in IS's self-proclaimed caliphate.

Shi'ite militias and Kurdish peshmerga have played a major role in the fight against the ultra-hardline Sunni militants elsewhere in Iraq, but with Mosul the plan is for the army to take the lead to avoid inflaming ethnic and sectarian sensitivities in the mainly Sunni Arab city.

The army won its first major victory over the insurgents last December in Ramadi and aims to retake Mosul this year, but Iraqi officials privately question whether that is possible.