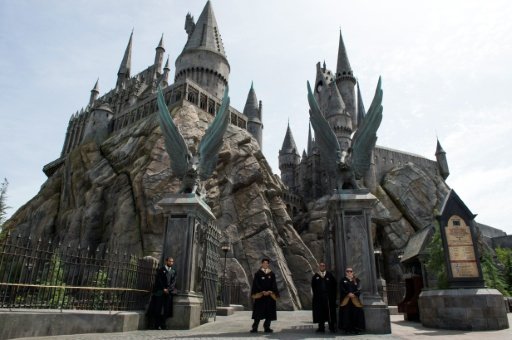 An exterior view of Hogwarts is seen during the 'Wizarding World of Harry Potter Opening' press preview at Universal Studios Hollywood in Studio City, California, on April 6, 2016. (AFP Photo)

Los Angeles: Fifteen years after Harry Potter's first big screen adventure, Universal is enchanting a new generation of Muggles with its most spectacular conjuring trick yet -- a theme park in the heart of Hollywood.

The "Wizarding World of Harry Potter" follows similar money-spinning ventures in Florida and Japan, but is set to be the most technologically advanced so far, incorporating state-of-the-art 3-D effects with the traditional fun of the fair.

Opening at Universal Studios beneath the Hollywood hills on Thursday, it is the latest attraction in a burgeoning film industry sideline which has become so lucrative executives are beginning to design sets with future theme parks in mind.

"When you think about the property of Harry Potter -- all seven books and eight movies -- there's no better place than the film-making capital of the world to have this ultimate experience," said Thierry Coup, a senior vice-president of Universal Creative, the company's research and development division.

The last Harry Potter film was released five years ago but the character's appeal remains as strong as ever, with fans eagerly awaiting stage show "Harry Potter And The Cursed Child," which opens in London this summer.

Meanwhile a spin-off movie trilogy is due to hit the big screen, starting with "Fantastic Beasts And Where To Find Them" later in the year.

Together with the recently introduced "Despicable Me Minion Mayhem," the award-winning "The Simpsons" park area and "Transformers: The Ride-3D," the Harry Potter attraction sees Universal partnering with Hollywood for a merchandising merry-go-round to rival Disney's.

Next up for Universal is "The Walking Dead," a permanent attraction harnessing the phenomenal success of the AMC zombie drama, while Disney itself has been picking up the pace since its 2014 Magic Kingdom expansion in Florida.

Before 2020, the company has plans for Avatar and Star Wars lands as well as Toy Story and Frozen expansions at its theme parks on both coasts.

Meanwhile, Motiongate Dubai, set to open in October, recently announced a starting slate of 27 attractions inspired by films from DreamWorks, Sony and Lionsgate, including "The Hunger Games", "How To Train Your Dragon," and "The Smurfs."

The new Harry Potter attraction marks Universal's fourth foray into the boy-wizard's universe, with two Orlando launches and an opening in Osaka, Japan, seeing the company increase visitors by up to 30 percent.

"The film is only one part of that, but you want to try and create a film that can be translated into all of this."

Harry Potter's enduring appeal was evidenced by Universal's announcement that Thursday's opening had sold out days ahead, marking the first time ever that the park has had to halt online ticketing transactions.

Los Angeles Mayor Eric Garcetti said the growth of Universal Studios -- three quarters of the park has been transformed over the last five years -- would create new jobs, stimulate hospitality revenues and strengthen the economy.

"In Los Angeles, tourism is surging. We've set records each of the last five years and we're just getting started," he added.

The attraction, which boasts the forbidding Hogwarts castle as its iconic focal point, transports visitors into the visual landscape of J.K. Rowling's books and the Warner Bros films that followed.

The attention to detail is impressive, from the fading patinas on the slate-gray stone blocks that make up the aged rustic Hog's Head tavern to the painstakingly worn edges of the stained furniture and the grimy floors.

The quaint fictional village of Hogsmeade bustles with the chatter of merchants on the cobblestone streets and a pub packed with thirsty patrons under a snow-capped roof.

If all that sounds like the run-of-the-mill theme park, the signature "Harry Potter and the Forbidden Journey" ride combining state of the art 360-degree 3-D special effects, live-action thrills and groundbreaking robotics, is anything but.

Gilmore, an architect by trade, says "Wizarding World" boasts many original props from the films, including the luggage racks from the Hogwarts Express train, Hagrid's motorbike and a costume from the Yule ball.

"Here, we don't have actors, we have real people. So it was very important that we at least realized the set design perfectly so that when you step into this world you feel you're in the film," he told AFP.

Among a international pack of reporters and photographers seeking their inner wizard at a preview on Wednesday were a number of stars from the films, including Tom Felton, who played Draco Malfoy, and Warwick Davis (Professor Flitwick).

"Even though I've experienced much like this, having worked on the films, for me coming to 'Wizarding World' is a more magical experience," said Davis, whose filmography includes several "Star Wars" episodes, "Labyrinth" and "Willow."

"These environments are more immersive because you can walk into somewhere like the Three Broomsticks from Hogsmeade and it exists in reality, whereas when you make the movies these locations and sets are quite separate."