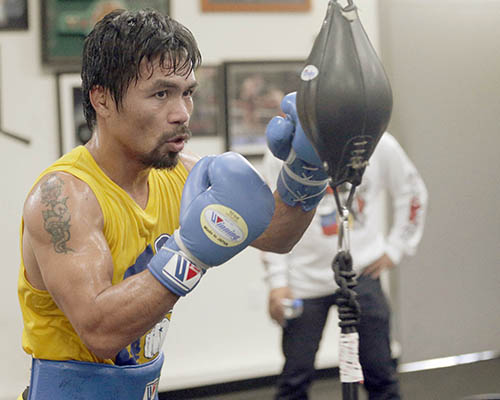 Las Vegas: Manny Pacquiao’s 21-year boxing odyssey will draw to a close here tonight with the Filipino icon aiming to cement his legacy as one of the greatest fighters in history with a decisive farewell victory over Tim Bradley.

The 37-year-old Pacquiao (57-6-2) says his third battle with American rival Bradley at the MGM Grand Garden Arena will be his last fight before he hangs up his gloves to pursue a political career in the Philippines.

The non-title welterweight showdown will be Pacquiao’s first since his unanimous defeat to Floyd Mayweather in last year’s money-spinning “Fight of the Century”, a bout which left the eight division world champion $150 million richer.

Pacquiao will earn another $20 million tonight for the final instalment of his trilogy with Bradley, who stunned the Filipino with a controversial split decision victory in 2012 before losing the rematch two years later.

While stating tonight’s fight will be his last, Pacquiao has been careful to leave the door open to the possibility of a return to the ring.

“I cannot say that I’m not going to come back,” Pacquiao told reporters this week, explaining that his mindset may change once he faces up to life without the sport that has made him both fabulously rich and a national hero.

“I cannot say right now what is the feeling of retiring in boxing. I’m not there yet. I don’t know how I’ll feel when I hang up my gloves,” he added.

Arum said Pacquiao could be persuaded to prolong his career if he scores a spectacular victory over Bradley, who has twice gone the distance with the Filipino slugger.

“I think if he wins this fight well, he’s going to find a way to continue,” Arum told AFP.

Roach has been in Pacquiao’s corner ever since the Filipino arrived at his Wild Card gym in 2001 looking for a trainer as he prepared to embark on the US phase of his career after fighting entirely in Asia up to that point.

“It’s been 15 years of greatness,” said Roach, who hopes Pacquiao will fight on but acknowledges that family pressures may mean his decision is final.