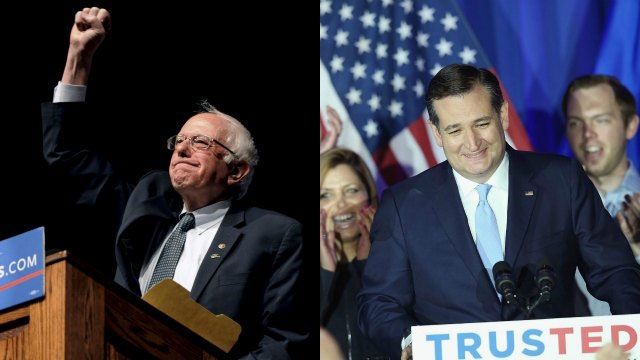 Bernie Sanders on Sunday continued his winning streak against Hillary Clinton in Wyoming, while Ted Cruz swept all delegates in Colorado against Donald Trump. (AFP Photo)

The 74-year-old Vermont senator registered his stunning eighth win out of the last nine contests, including one that counted the votes of Democrats living abroad.

He finished 12 points ahead of the former secretary of state with 56-44 per cent of the vote in Wyoming, the smallest state in the Democratic nomination race.

The state, which is overwhelmingly Republican, only awards 14 delegates, meaning Sanders barely puts a dent in Clinton's more than 200-delegate lead.

The former secretary of state has 1,287 delegates based on primaries and caucuses to Sanders' 1,037.

When including superdelegates, or party officials who can back any candidate, Clinton has 1,756, or 74 per cent of the number needed to clinch the nomination. Sanders has 1,068.

Speaking later, Sanders, who locked horns with Clinton over trade and the so-called Panama Papers scandal this week, said, "I think it's fair to say that when we began this campaign we were considered to be a fringe candidate.

"I think that it is very fair to say that we were way, way behind during the first half of this contest, but we are having, to say the least, a very strong second half, and we are closing very fast."

Sanders has been consistently trying to chip away at Clinton's big lead in the number of delegates needed to secure the party's nomination.

The eventual margin of victory was slimmer than what some experts had anticipated but represented a convincing victory for the democratic socialist in one of the most conservative states in the country.

Meanwhile in the Republican camp, Cruz, the 45-year-old senator from Texas, finished Colorado's delegate fight with overwhelming victory, picking all 13 of the final delegates up for grabs to complete a clean sweep of the state as reward for a carefully organised campaign.

"Thank you Colorado for another resounding victory!" Cruz tweeted.

"Today was another resounding victory for conservatives, Republicans, and Americans who care about the future of our country," the Cruz campaign said in a statement.

Cruz has now won all 34 delegates up for grabs in the state and is now fewer than 200 delegates behind Trump in the race to the 1,237 needed to clinch the Republican nomination.

The latest victory of both Sanders and Cruz is seen as a big morale booster heading into the crucial New York primary on April 19.