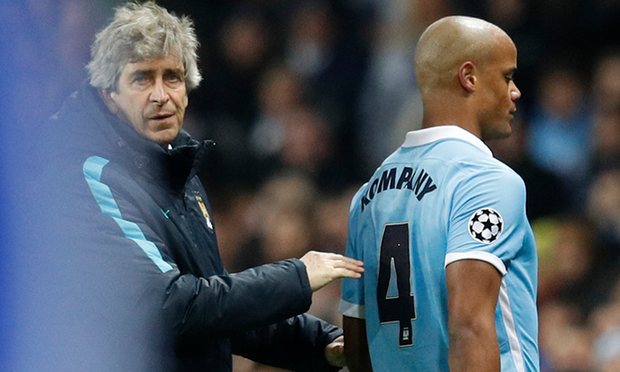 The Belgium centre-back, 30, has not played since injuring his calf against Dynamo Kiev last month and missed last week's first leg in Paris, which saw City score two valuable away goals in a 2-2 draw.

He took part in City's final pre-match training session at the club's City Football Academy complex, but Pellegrini said that he would not feature against PSG.

"Vincent Kompany is not 100 per cent," Kompany told his pre-match press conference, adding that it was "not possible" for him to play.

Kompany's fellow centre-back Nicolas Otamendi did not take part in full training, having hurt his ankle in Saturday's 2-1 win over West Bromwich Albion, but Pellegrini said he would be able to play.

"Nico twisted his ankle in the last game," said the Chilean. "He has some pain, but it's not dangerous."

Playmaker David Silva, who missed the West Brom game with an ankle problem, is also available, but Raheem Sterling remains absent with a groin injury and Samir Nasri is ineligible.

City are bidding to reach the Champions League semi-finals for the first time, while French champions PSG graced the last four once in 1995.