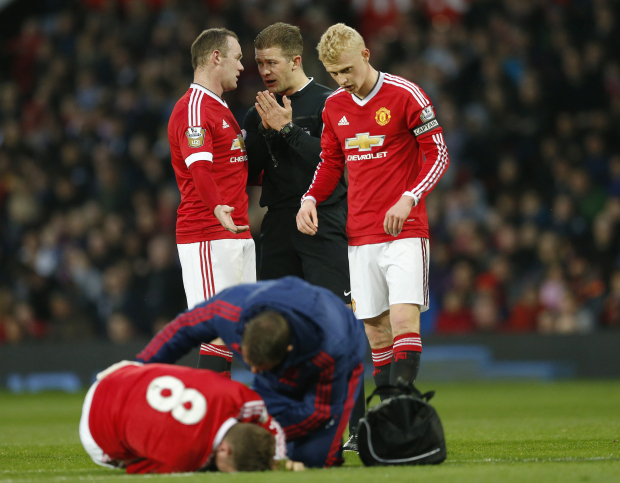 For West Ham, the competition represents a final opportunity to crown their farewell season at the Boleyn Ground, which stages its last ever FA Cup tie, with a piece of silverware.

Visiting manager Louis van Gaal, meanwhile, may need to win the FA Cup, which his side hasn't won since 2004, if he is to stand any chance of holding onto his job, after Sunday's 3-0 defeat at Tottenham Hotspur left his side four points off the Champions League places with only six games of the season remaining.

"It is the last chance of a title so it is very important for the players, for the club, for the manager, for the fans," said the Dutchman, who is yet to win a trophy in close to two full seasons at Old Trafford.

"And still we have one day less than West Ham United, because that's also important. But we have proved against Arsenal and Man City (in the Premier League) that in spite of less days to recover we could beat them.

"So I hope that we shall recover very good, also mentally, because this (losing to Tottenham) is again a blow of course. But everybody knows that this is the last chance.

"Both teams have to cope with that. Both teams know that when you are not winning, you are out of the cup and you don't have any title."

Van Gaal could be boosted by the return of captain Wayne Rooney, who had a run-out for the club's under-21s on Monday after missing 12 games with a knee injury.

But given a choice of venues for such a pivotal encounter in his United tenure, it is reasonable to assume that the Boleyn Ground would have been among the very last names on Van Gaal's list.

The venerable east London stadium, West Ham's home since 1904, will be charged with emotion and has already provided the scene for a last-gasp 2-1 victory over Liverpool in a fourth-round replay, as well as league wins over Tottenham, Liverpool and Chelsea.

Arsenal almost became the latest heavyweights to fall to Slaven Bilic's side on Saturday, when Andy Carroll scored a typically emphatic hat-trick as West Ham came from 2-0 down to rescue a 3-3 draw.

United's defence was breached three times in six fraught minutes at Tottenham and Van Gaal could not disguise his discomfort at the thought of the bruising Carroll going up against Chris Smalling and the lightweight Daley Blind.

"I've seen the Andy Carroll Show," he said. "And (against Tottenham) I think our problem was also the miscommunication of our central defenders.

"I hope that we improve our communication because it is very important this game for us."

Carroll's time at West Ham has been hampered by injuries and despite the likely unavailability of fellow striker Diafra Sakho, Bilic refused to confirm if he would start on Wednesday.

"I'm not blaming him, but it's a fact that he's out every now and then," said the Croatian, who is bidding to lead West Ham into the last four for the first time since they last reached the final in 2006.

"The medical team and the club are doing everything they can with Andy and he is doing it, but he should be even better if he can stay away from those injuries for a few years.

"Will he start against Man United? I hope he's going to be fit for Man United. I don't think Sakho or (Alex) Song will be fit for that game."