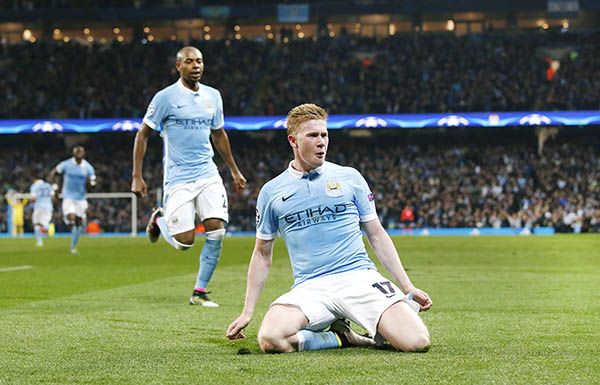 MANCHESTER: Manchester City reached the semi-finals of the Champions League for the first time after a superb curling shot from Kevin de Bruyne gave them a 1-0 second leg win over Paris St Germain that sealed a 3-2 aggregate victory last night.

The Belgian picked his spot perfectly with 14 minutes remaining, firing past goalkeeper Kevin Trapp as PSG went out of the competition in the quarter-finals for the fourth successive season.

City should have taken the lead at the Etihad Stadium in the first half when Trapp brought down Sergio Aguero to concede a penalty, but the normally lethal Argentine fired his spotkick wide of Trapp’s left-hand post.

City would have advanced on the away goals rule if the game had finished 0-0 or 1-1 following last week’s 2-2 draw in Paris, but the final scoreline just about reflected City’s superiority in a tense, dramatic match.

Meanwhile, Cristiano Ronaldo’s hat-trick inspired Real Madrid to a 3-0 comeback victory over VfL Wolfsburg that clinched a place in the semi-finals.

The prolific Portuguese got the 10-times European champions off to the perfect start by tapping in Daniel Carvajal’s cross after 16 minutes and then headed a second goal less than a minute later from Toni Kroos’ corner.

Ronaldo capped a 3-2 win on aggregate when he curled in a free kick after 77 minutes, his 16th goal in this season’s competition taking him within touching distance of his record of 17 in 2013-14.

It is the sixth successive season that Real have reached the last four.

Real coach Zinedine Zidane’s only change from the first leg was to replace the much-criticised Danilo at right back with Carvajal.

Carvajal vindicated Zidane’s decision when he beat Julian Draxler to the ball in midfield before setting up Ronaldo’s opening goal.

Top scorer this season in La Liga and the Champions League, the 32-year-old was in the mood for another big European occasion and he sent the Bernabeu crowd wild with delight by scoring twice more.