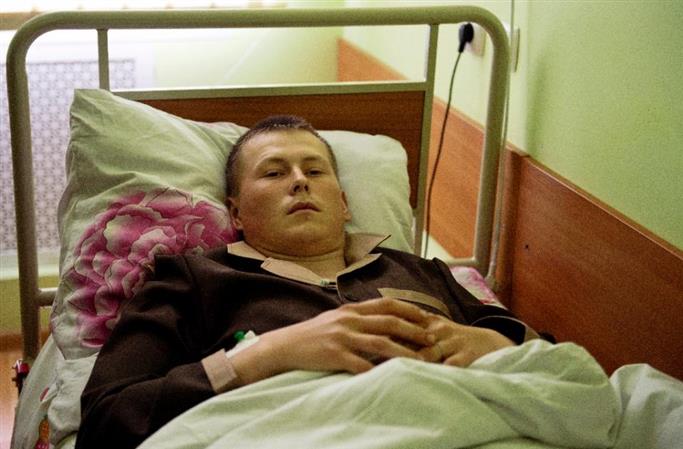 Alexander Alexandrov as identified by Ukranian officials lies on a bed at the Kiev Millitary hospital on May 19, 2015. (AFP Photo)

Moscow argues that sergeant Aleksander Aleksandrov and captain Yevgeny Yerofeyev had delisted from the armed forces by the time they had crossed the Ukrainian border into the rebel province of Lugansk.

But Ukraine cites testimony the two men gave during their interrogation and in subsequent conversations with reporters in which both acknowledged to being active members of Russia's GRU military intelligence at the time.

They recanted those statements during the trial.

Ukrainian military prosecutor Maksym Krym said during Friday's court hearing that both men should be jailed for 15 years, stripped of their property and denied the right to take part in military duty for three years.

Krym also asked the three-judge panel to keep the men in custody until their sentence goes into effect.

Yerofeyev's lawyer Oksana Sokolova told reporters that she would ask the court to "pardon and release" the suspects.

The court's verdict is expected within the coming weeks.

The case has inflamed passions in both countries -- their relations effectively frozen since Russia's March 2014 annexation of Crimea and alleged backing of the rebel revolt.

Moscow denies direct involvement in the conflict and calls Russians caught or spotted in the war zone as vacationing soldiers or volunteers.

Ukrainian President Petro Poroshenko has proposed swapping the soldiers for Nadiya Savchenko -- a Kiev-born helicopter pilot who was sentenced in Russia to 22 years in prison for her alleged involvement in the killing of two Moscow reporters in the war zone.

But such an exchange is complicated by Savchenko's continued denial of any wrongdoing. Russian law says that foreign convicts may only be sent home to serve their time there once they confess.