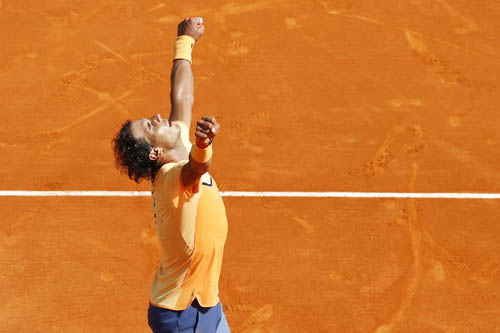 Monte Carlo, Principality of Monaco: Rafael Nadal returned to the final of the Monte Carlo Masters for the first time in three years as the eight-time champion struggled to close out a 2-6, 6-4, 6-2 win over Andy Murray yesterday.

Nadal, who lifted the title in the Principality uninterrupted from 2005-2012, last lost the 2013 final to Novak Djokovic.

But Spain’s fifth-seeded king of clay showed hints of the form which took him to multiple seasons of total dominance on the surface as he overcame second seed Murray in a battle lasting for more than two and a half hours.

It was not all one-way traffic for Nadal, who spent 10 minutes in the final game between his first match points and his fifth in fighting off a late Murray charge.

The 28-year-old Murray saved four Nadal match points and had two break chances of his own before Nadal finally drilled over a winner which the Scot could not quite handle.

Nadal, 29, will bid for a ninth title in the Principality on Sunday against either France’s Gael Monfils who beat eighth seed Jo-Wilfried Tsonga 6-1 6-3 to become the first Frenchman to reach the Monte Carlo final since Cedric Pioline in 2000.

Murray had been working to repeat his upset of the Spaniard from the Madrid Masters final last May as he played in his third Monte Carlo semi-final after going this far in 2009 and 2011 – losing both matches to Nadal.

Murray was unable to maintain his winning momentum after lifting the opening set against the Spaniard who has spent the last 18 months recovering mental confidence after a deep slump.

The 14-time Grand Slam champion has not won a title of any kind since last summer in Hamburg. Nadal improved to 17-6 over Murray, defeating him seven of the eight times they have met on clay. The Spaniard ran his record in semi-finals in Monte Carlo to an impressive 10-1, and now stands 57-4 over his career record at the event.

Nadal will be playing in his 100th ATP final (67-32) when he takes on the winner from the French pair of eighth seed Tsonga and number 13 Monfils.

Nadal stands 27-14 at the Masters 1000 level, one title behind all-time leader Djokovic.

Murray will need to step up his pace on clay after winning his first two trophies on the surface last spring in Munich and Madrid back-to-back.

The Scot won the opening set in 49 minutes with a single break of Nadal, but could not carry on after being broken at the start of the second set.

The second seed got the break back a game later but then lost serve for a second time in the seventh game as Nadal made a winning return off a Murray overhead. The Spaniard claimed the set after more than an hour as the total match time ticked over to two hours.