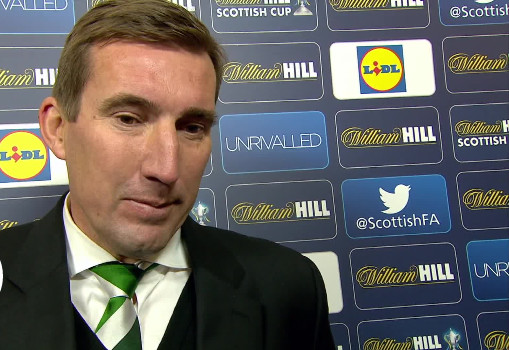 Logan, a surprise choice as a replacement for the suspended Mark Oxley in front of regular back-up Otso Virtanen, kept his side in the semi-final as he made three one-on-one saves from Dundee United as the match ended goalless after extra time.

The 29-year-old, who hadn't played a senior match since an appearance for Rochdale in December 2014, then went on to save spot-kicks from Blair Spittal and Billy McKay as Hibs won the shoot-out 4-2 to seal their third final appearance in five years.

It was an inspired decision from Stubbs, who is hoping to lead his side to a first Scottish Cup win since 1902 in May's final where they will face the winners of Sunday's match between Old Firm rivals Rangers and Celtic.

"I went for his experience and it looks like I made the right call," a delighted Stubbs said.

"I thought he had too many saves for my liking.

"Obviously he hasn't played for a while and I got asked if I was concerned. It is different with goalkeepers, they don't run or cover anywhere near the same distance as outfield players.

"So that didn't concern me. He has looked sharp in training and he used his experience and that is probably why I went with him today.

"He came to vie for a position and today he is probably walking away with the man of the match award. If you do that it probably gives me something to think about."

Jason Cummings fired home the decisive fourth penalty for Hibs in the shoot-out to make amends for the 29th minute spot-kick he made a meal of when he sent a Panenka-style dink sailing over the bar.

"I wanted to strangle him, initially," Hibs boss Stubbs said. "I didn't see it. I went into the toilet. I heard a groan as I came out so I knew he had missed.

"I didn't know how he had missed but when I got back a few of the lads were shaking their heads and saying he had tried to dink him.

"I can't question him. He has bundles of personality and character.

"He will keep him improving and he will have learned from that and will make him better and help him make better decisions in the latter stages of cup competition."

The Scottish Cup has proved a welcome distraction for Dundee United, who languish eight points adrift at the bottom of the Premiership, and manager Mixu Paatelainen was deeply disappointed after the defeat.

"I'm totally gutted for the boys because for the vast majority of the match we controlled the game," Paatelainen said. "We were the better team, we passed the ball and created great goal-scoring opportunities so in the end to lose it after penalties is really disappointing.

"But if you don't score then you can't win and that's been the story of the season.

"If you're one-on-one with the goalkeeper three times you'd like to think at least one goes in the net but all credit to their goalkeeper they didn't."