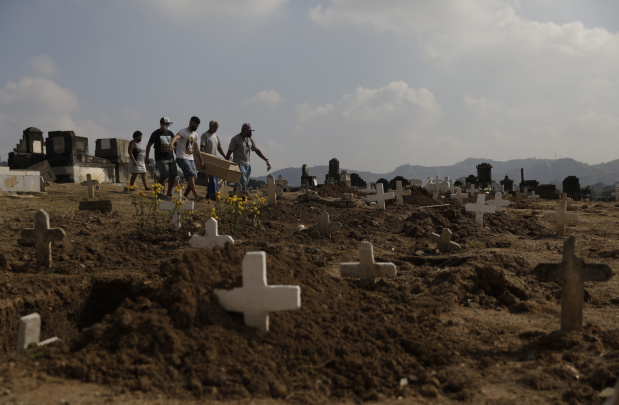 Marcos Vinicius Andrade da Silva, 26, helps to carry the coffin of Valnir Mendes da Silva, 62, who died on a sidewalk in the Arara slum after experiencing difficulty breathing, at his funeral at Cemiterio de Inhauma, during the coronavirus disease outbreak, in Inhauma, Rio de Janeiro, Brazil, May 18, 2020. REUTERS/Ricardo Moraes

Rio De Janeiro: Valnir da Silva died on the streets of a poor Rio de Janeiro neighbourhood on Saturday. His body lay on the sidewalk for 30 hours, according to relatives and neighbours.

Although they may never be sure, they suspect the 62-year-old was an uncounted victim of the coronavirus outbreak tearing through Rio's marginalised communities and stretching public services past their limits.

As much of Asia and Europe pass the worst of the pandemic, Brazil is hurtling toward its peak, with more than 17,000 already dead. Latin America's biggest country passed Britain this week in a grim toll of the most confirmed cases after Russia and the United States.

Deaths in Rio state trail only the more populous Sao Paulo. The outbreak is filling up intensive care units and thinning out the ranks of emergency services.

Ricardo Moraes, a Reuters photojournalist in Rio, was covering a police operation early on Sunday when he heard reports about the corpse in the nearby favela of Arara.

When he arrived at the scene around 7am on Sunday, Moraes found Silva lying on the same spot where locals said he had died on Saturday morning - sandwiched between a row of parked cars and a small soccer pitch.

A group of locals at a nearby bar said Silva's life began to fall apart after the death of his wife a few months back, and he was soon living on the street.

On Saturday, when Silva complained that he could not breathe, the locals said they called an ambulance for him, but he died before it arrived.

Some residents thought he had died from Covid-19, the respiratory diseases caused by the coronavirus, but nobody was certain. The disease entered Rio via wealthier residents returning from vacation in Europe, but it has since spread into poorer neighbourhoods.

The ambulance arrived around 4pm on Saturday, locals said, but left without the body. Paramedics put his cause of death as cardiac arrest and another unknown cause, according to the death certificate seen by Reuters.

In a statement, the city ambulance service said it was not responsible for removing the corpse. They did not say whether Silva had been tested for Covid-19.

The next morning, Silva's stepson Marcos Vinicius Andrade da Silva, 26, tried to find another authority to pick up the body.

He said he spoke with police officers on patrol, who alerted colleagues at the 21st Civil Police station nearby, to no avail.

A civil police spokeswoman said they only take charge of removing corpses in criminal cases.

After spending the day on the phone, the stepson said a funeral team arrived finally at 5pm on Sunday.

"We were very relieved that they had taken him away... but also very sad about what happened," he said.

On Monday, da Silva was buried at a ceremony with four people, including Marcos and his mother, in attendance.