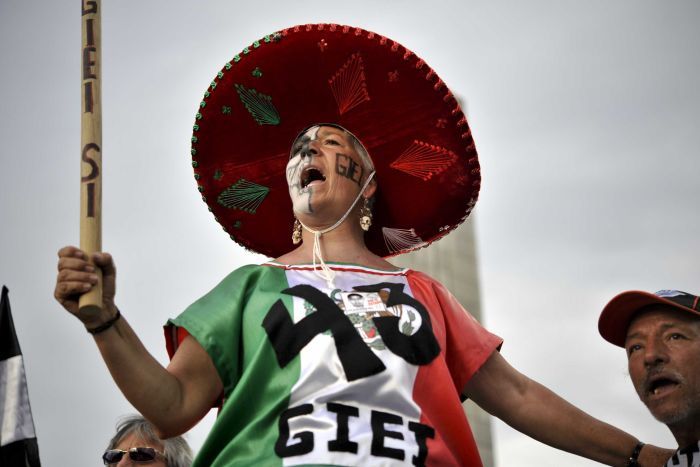 A woman protests with the parents of 43 missing students during a march 18 months after their disappearance. (AFP Photo)

Mexico City: The foreign experts came to Mexico in March 2015 with the daunting task of helping investigators solve the mysterious disappearance of 43 students.

A year later, the five experts from the Inter-American Commission on Human Rights are going home without an answer for the desperate parents of the young men missing since September 2014.

But they leave behind a blistering account of the government's investigation -- a report on Sunday that accused authorities of stonewalling them in their quest for new information and of possibly torturing suspects.

Before their mission formally ends on Saturday, two of the experts told AFP they are now concerned about how the parents, who have a tense relationship with the government and wanted the experts to stay, will be treated.

The experts also voiced hope that the government will follow their recommendations and use their conclusions to improve the country's opaque judicial system.

"We are sad to leave without being able to say where the missing are," Angela Buitrago, a former Colombian prosecutor, said on Tuesday.

"It's very important that the victims' right to know the truth be guaranteed, that they be protected and given visibility by the Mexican state," Buitrago said.

Fellow Colombian lawyer Alejandro Valencia said the government has a "duty to guarantee it will investigate this grave human rights case."

At the request of the parents, the government invited Valencia and Buitrago, along with a Chilean lawyer, a former Guatemalan attorney general and a Spanish psychologist, to help in the investigation.

President Enrique Pena Nieto faced international outrage and protests before his administration invited them to help resolve a case that became a symbol of the tens of thousands of deaths and disappearances in a decade-old drug war.

When the experts arrived, the government had already concluded that the students vanished after they were abducted by municipal police in the southern city of Iguala on the night of September 26-27, 2014.

Prosecutors said the officers delivered the 43 young men to a drug gang, which killed them and incinerated their bodies at a garbage dump. The remains of only one student have been identified.

But parents of the students never bought that story, especially after the experts said in a September report that there was no scientific proof that the teachers-in-training were burned at the dump.

While the experts are leaving, the commission will set up a mechanism to make sure the government pursues their recommendations, including investigating the possibility that the students were attacked because they inadvertently commandeered a bus packed with heroin.

Valencia said this could mean periodic visits to Mexico, which could help ensure that the parents of the students, who had little communication with the government before their mission, are protected.

"Their security really worries us because we have seen in recent weeks actions that not only re-victimize them but also criminalize them," Valencia said.

Valencia said local media recently published an alleged recording of a conversation between a student's father and a lawyer in which they apparently discuss money sent to the parents by a gang.

While Mexico has a law on protection of victims, Valencia said it needs to "improve a lot" and "dignify" the victims.

The parents are from the impoverished state of Guerrero and their sons, most of them first-year students, were in school to become teachers in rural areas.

The families said the experts' latest report exposed the government's "big lies." Mario Cesar Gonzalez, whose son Julio Cesar is among the missing, said the families "don't trust any authority."

Pena Nieto has been criticized for only meeting twice with the parents, though other officials have held several meetings with them to give them updates about the investigation.

After meeting with the experts on Tuesday, deputy interior minister Roberto Campa said their recommendations on attention to victims "must be... included in public policies."

Pena Nieto vowed Sunday that his government would study the experts' report and keep working to "get justice."

Officials denied stonewalling the experts, saying they gave "full access" to the probe and that their mission was not extended because they were given enough time.

But the experts said the authorities began to be less cooperative in January, blocking interviews with jailed suspects or soldiers who were present the night of the mass disappearance.

"We are not absolutely sure what happened. Maybe the lines of investigation were getting close to some important clues," Valencia said.