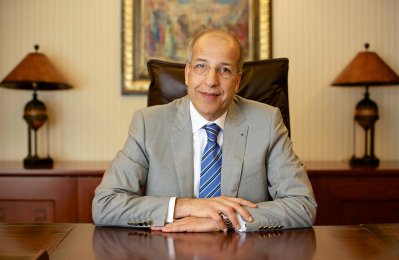 Bank ABC (Arab Banking Corporation), a leading bank in Bahrain, said it continued to weather the unprecedented market conditions with strong balance sheet, robust underlying business revenues and pre-provision profits of $191 million, showing a marked improvement from $114 million in the first half.
Announcing its results, Bank ABC said it has recorded a consolidated net profit for the third quarter of $11 million compared to $49 million reported for the same period last year. Its earnings per share for the period was minimal, compared to $0.02 in the same period in the previous year.
Total comprehensive income attributable to the shareholders of the parent was $38 million compared to $17 million reported for the same period last year.
On a headline basis, total operating income was $188 million, 4% lower compared to $196 million reported for the same period last year.
On an underlying basis, total operating income was at $212 million for the period, compared to $218 million for the same period last year.
Net interest income was $130 million, 8% lower against $142 million reported for the same period last year, after absorbing the impact of declining interest rates and FX depreciation.
The bank said it has started showing signs of some recovery from the unprecedented and deeply challenging trading conditions encountered during H1 2020, even as a number of the challenges encountered in the first half continued to impact its results.
On its nine-month performance, Bank ABC said its consolidated net loss attributable to shareholders was $56 million, compared to a net profit of $161 million reported for the same period last year.
Total comprehensive loss attributable to shareholders stood at $358 million compared to total comprehensive income of $176 million reported last year, reflecting the net loss and significant market volatility during nine months 2020 from Brazilian Real depreciation of 21% and unfavourable movements in fair value of debt instruments.
The leading Bahrain banking group began the year well with a strong balance sheet and good client transaction pipeline as it continued the digital and wholesale bank transformation.
However, as the year progressed, its plans were heavily impacted by the unique combination of Covid19, collapse in oil prices and consequent economic and market pressures, together with the emergence of some major fraud cases which significantly affected loan loss provisions, it added.
Operating expenses were at $113 million, 11% lower than $127 million for the same period last year, benefiting from the cost savings initiatives during the year, while reprioritising the continuing investments into the group’s digital transformation and strategic initiatives.
On an underlying pre-provision basis (adjusting for FX, tax and other factors), the Group achieved a net result of $71 million compared to $74 million in 2019. Impairment charges (ECL) for the period were $60 million compared to $25 million reported for the same period last year.
Group Chairman Saddek Omar El Kaber ppointed out that the Q3 results showed the Bank ABC's significant capacity to weather extreme volatility.
"Against the backdrop of the pandemic and other market uncertainties, we have been able to maintain a strong balance sheet, excellent liquidity and effective operating processes. We will continue to adapt our business model by further reducing our operating costs and increasing our focus on fee generating businesses of the Group. Likewise, our digital transformation will remain a key driver in moving us to the Bank of the future," he noted.
"In Q3, the underlying business performance in most units picked up, although the emergence of ‘second wave’ in many geographies continue to pose a risk of disruption to the fragile signs of recovery," stated El Kaber.
Overall business and client revenues held up well, while net interest margins were impacted by falling interest rates, and Brazilian Real depreciation created a significant translation impact on revenues from Banco ABC Brasil.-TradeArabia News Service