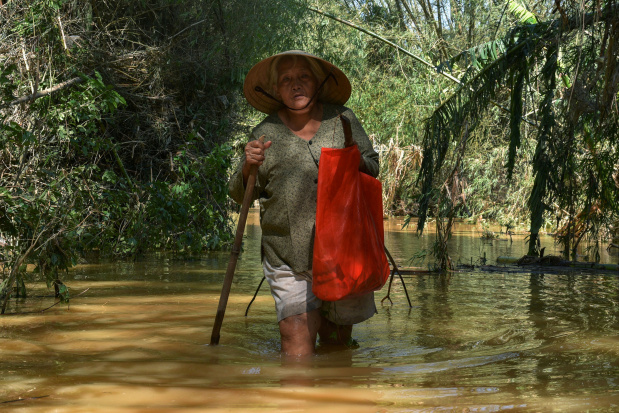 FILE PHOTO: A woman walks in a flooded road after her village was isolated by the Dakdrinh Hydropower discharge in the Typhoon Molave aftermath, in Tinh An village, Quang Ngai province, Vietnam October 29, 2020. REUTERS/Thanh Hue/File Photo

Hanoi: Natural disasters in the past two months caused Vietnam 30 trillion dong ($1.3 billion) in economic damage and killed 192 people, with 57 still missing, authorities said on Wednesday, with its central provinces bearing most of the losses.

Vietnam's central region has had a tough year, with its important tourism industry crippled by the coronavirus pandemic long before the arrival of nine typhoons that wiped out crops and damaged homes of hundreds of thousands people.

The two-month toll surpassed losses for the whole of last year, when disasters killed 132 people and caused 6.2 trillion in damage, official data showed.

"We have to make sure our residents are not homeless, suffering from hunger or lacking fresh water post-typhoon," Cuong added.

Vietnam's economic growth is expected to slow to 2%-3% this year after expanding 7.02% in 2019 due to the wider impact of the coronavirus pandemic and natural disasters.

Vietnam is prone to destructive storms and flooding due to its long coastline.

About 11.8 million people in Vietnam's costal provinces are exposed to the threat of intense flooding, with 35% of settlements located on crowded and eroding coastlines, a World Bank report said in October.