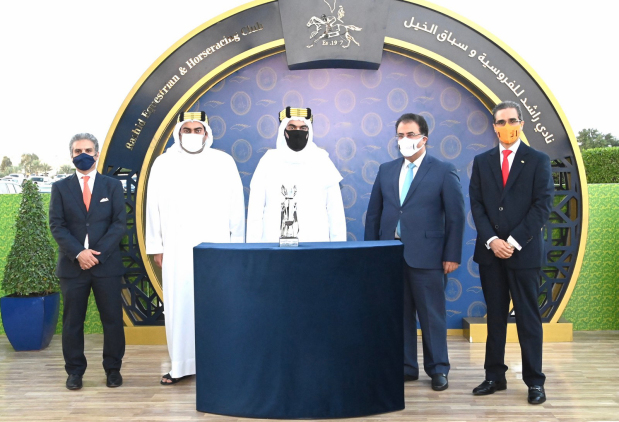 One of the winners being honoured

Medal Winner won the day’s eighth race, for imported horses of all classes aged three and above, outpacing second-placed Jazeel of Victorious by two and a quarter length. The third position in the 2,000 metre race was taken by Desert Lion, owned by Isa Mahmood Al Seddiqi. The winner received a prize of BD3,000.

The GPIC Cup for the seventh race of the day, for imported horses three years old and upwards, was claimed by Graphite Storm, owned by Al Hassanain Syndicate, trained by Ali Jan and ridden by Andrew Elliott.

The winner was followed by Al Mohamediya Racing’s Dark Shadow in second place while Sonja Henie of Victorious finished third. The 1,200m race offered a prize of BD4,000.

Al Adiyat Racing’s Pulp Fiction clinched the second spot while Breathtaking, owned by Abdulla Fawzi Nass, was third. The winner of the race for GPIC cup received a prize of BD3,000.

Naahy, owned by Shaikh Mohammed bin Abdulla bin Isa Al Khalifa, was the winner of the second race while Al Mlolesh 1748 of Victorious claimed victory in the opening race of the day.