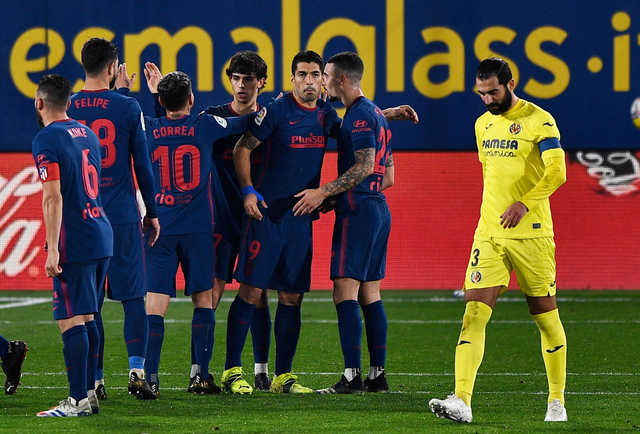 VILA-REAL - La Liga leaders Atletico Madrid secured a vital 2-0 win away to Villarreal on Sunday to reaffirm their title ambitions following a difficult run of results.

Diego Simeone's side were smarting from twin defeats to Levante and Chelsea but went ahead in the 25th minute courtesy of an Alfonso Pedraza own goal following a goalmouth scramble, the strike being flagged offside then given after a VAR review.

Atletico survived another video review just before halftime when Thomas Lemar was shown a yellow card rather than a red for elbowing an opponent before record signing Joao Felix came off the bench to double their lead in the 69th on the volley.

A first win in four games in all competitions moved Atletico on to 58 points after 24 games, five clear of second-placed Barcelona, who have played 25, and six above third-placed Real Madrid.

Real play at home to Real Sociedad on Monday before visiting Atletico next Sunday in a crucial game in the title race.

"This win gives us a lot of confidence and puts us back on the path we were on before and now we're really looking forward to the derby," said Stefan Savic.

"This was a very important game in a ground that is always difficult for us, we were on a bad run but we stood tall."

Villarreal slid down to seventh in the standings on 37 points and are without a win in their last seven league games.

"We're annoyed, we're finding it very difficult to score goals at the moment, behind we find it very hard to get back into a game and we need to bring an end to this run," said striker Gerard Moreno.

Unai Emery's side took the game to Atletico in the early stages but struggled to create any real danger and fell behind from a set piece.

Thomas Lemar whipped a corner towards the far post and Savic nodded it across the goal where it was inadvertently bundled in by Pedraza.

Villarreal missed a great chance to equalise before halftime when Moreno scuffed a shot which keeper Jan Oblak saved and Atletico captain Koke had to scramble the loose ball off the line.

Atletico nearly doubled their lead early in the second half through top scorer Luis Suarez but the Uruguayan's shot was tipped over the bar by Sergio Asenjo.

Villarreal reasserted themselves on the game but again failed to get past Oblak and were dealt a fatal blow by Felix, who celebrated his first goal since late January by putting his finger to his lips.