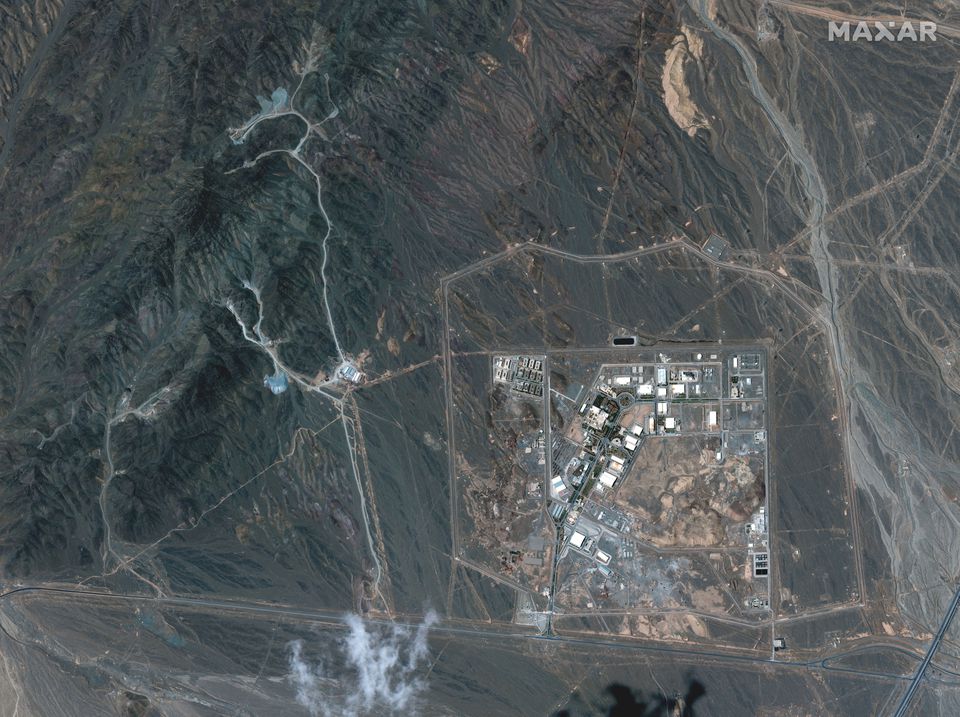 A view of the Natanz uranium enrichment facility 250 km (155 miles) south of the Iranian capital Tehran, in this Maxar Technologies satellite image taken last week and obtained by Reuters on April 12, 2021. (Reuters Photo)

The European countries party to the Iran nuclear deal told Tehran on Wednesday its decision to enrich uranium at 60% purity, bringing the fissile material closer to bomb-grade, was contrary to efforts to revive the 2015 accord.

But in an apparent signal to Iran's arch-adversary Israel, which Tehran blamed for an explosion at its key nuclear site on Sunday, European powers Germany, France and Britain added that they rejected "all escalatory measures by any actor".

Israel, which the Islamic Republic does not recognise, has not formally commented on the incident at Iran's Natanz site, which appeared the latest twist in a long-running covert war.

The nuclear deal has unravelled as Iran has breached its limits on uranium enrichment in a graduated response to the U.S. withdrawal from it in 2018 and Washington's reinstatement of harsh economic sanctions against the Islamic Republic.

Last week, Iran and fellow signatories held what they described as "constructive" talks to restore the deal ditched by the former Trump administration - which saw the terms as too lenient on Tehran - in a move welcomed by Israel.

But Britain, France and Germany said Tehran's new decision to enrich at 60 percent, and activate 1,000 advanced centrifuge machines at its Natanz plant, was at odds with the talks, not based on credible civilian reasons and constituted an important step towards the production of a nuclear weapon.

"Iran's announcements are particularly regrettable given they come at a time when all JCPoA (Joint Comprehensive Plan of Action) participants and the United States have started substantive discussions, with the objective of finding a rapid diplomatic solution to revitalise and restore the JCPoA," the three countries said in a statement, referring to the 2015 deal.

"Iran’s dangerous recent communication is contrary to the constructive spirit and good faith of these discussions," it said of the talks, which resume between Iran and global powers in Vienna on Thursday, aimed at salvaging the accord.

In an apparent rebuff later on Wednesday, Iranian Supreme Leader Ayatollah Ali Khamenei said the United States was trying to impose its terms for rescuing the deal and European powers were doing Washington's bidding.

"America does not seek to accept the truth in negotiations ... Its goal in talks is to impose its own wrong wishes ... European parties to the deal follow America's policies in talks despite acknowledging Iran’s rights," Khamenei, who has the last word on Iranian matters of state, was quoted as saying by state television.

"The nuclear talks in Vienna must not become talks of attrition...This is harmful for our country."

Biden took office in January with a commitment to rejoin the deal if Tehran returns to full compliance with its restrictions on enrichment. Tehran has repeatedly said that all sanctions must be rescinded first.

"We have already declared Iran's policy. Sanctions must be removed first. Once we are certain that has been done, we will carry out our commitments," Khamenei said, according to semi-official Tasnim news agency.

"The offers they provide are usually arrogant and humiliating and are not worth looking at."

Iran has "almost completed preparations" to launch 60% enrichment and has notified the International Atomic Energy Agency that it will activate 1,024 more IR-1 centrifuges, its older first generation of the machines at Natanz, the U.N. nuclear watchdog said later on Wednesday.

In an allusion to the Natanz blast and Iran's response, the European statement said: "In light of recent developments, we reject all escalatory measures by any actor, and we call upon Iran not to further complicate the diplomatic process."

Iran's leading Gulf foe Saudi Arabia also weighed in on Wednesday, saying it believed any revival of the nuclear deal should be a starting point for further talks that include regional states to expand the accord. read more

Rayd Krimly, head of policy planning at the Saudi foreign ministry, told Reuters any deal that fails to effectively address the security concerns of countries in the region would not work, and Riyadh was consulting with the global powers.

"We want to make sure at a minimum that any financial resources made available to Iran via the nuclear deal are not used...to destabilise the region," he said.

Iran’s deal with the six powers caps the fissile purity to which it can refine uranium at 3.67%. That is well under the 20% achieved before the agreement, and far below the 90% suitable for a nuclear weapon.