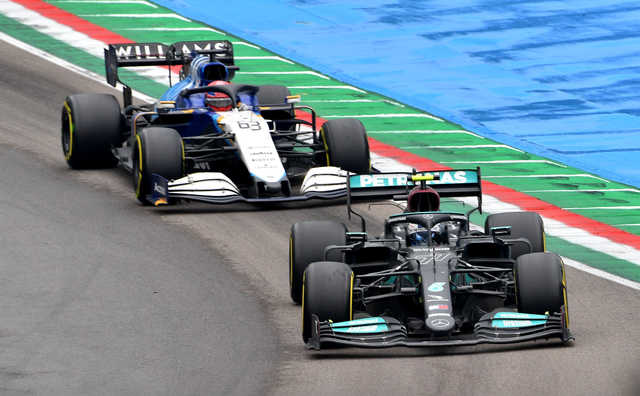 George Russell asked Valtteri Bottas if he was trying to kill them both after the pair collided in Sunday's Emilia Romagna Grand Prix at Imola.

The smash between Bottas, Mercedes team mate to seven-times world champion Lewis Hamilton, and Williams driver Russell brought the race to a halt with debris strewn across the asphalt.

Russell clambered out and went over to confront the Finn, who appeared to raise a finger in response.

"I asked him if he was trying to kill us both," Russell, who had been fighting for ninth place and has been seen as a contender to take Bottas's seat next year, told Sky Sports television.

Television images were inconclusive where the blame lay, but rising star Russell felt the experienced Finn had moved over and nudged him towards the wet edge of the track -- something Bottas was adamant had not been the case.

Stewards ruled it was a racing incident after hearing from both drivers.

"I was coming on Valtteri massively fast, I had the slipstream and the DRS (drag reduction system) and just as I pulled out he jolted very, very slightly to the right, which is a tactical defence that drivers in the past used to do," said Russell.

"There is a gentleman's agreement that is not what you do because it is incredibly dangerous.

"In completely dry conditions I'd have been fine but it just put me onto the wet patch and I lost it... we're going at 200mph and you need to respect the speed and the conditions," added the Briton.

"A P9 (ninth) for him is nothing but for us it's everything," said Russell, whose team have scored only one point in the last two seasons. "I'm going for the move, the move would have been absolutely easy."

Bottas told reporters he had been unable to hear what Russell had said because he was still in the car with his helmet on but denied doing anything wrong.

"He went for it, lost it and hit me and it was game over," said the Mercedes driver, who crouched down by the recovery vehicle after leaving the track

"I didn't make any sudden moves and it's quite clear from his onboard (cameras) as well," he said. "When I race I have respect."

Bottas said he would have defended against any driver and ridiculed a suggestion that he might have been more reluctant to let Russell go past given their potential rivalry for the Mercedes seat.

"I'm sorry, I lost my aluminium foil hat somewhere," he said. "It's quite a theory. I'm not keen to lose any positions. That was normal defending."