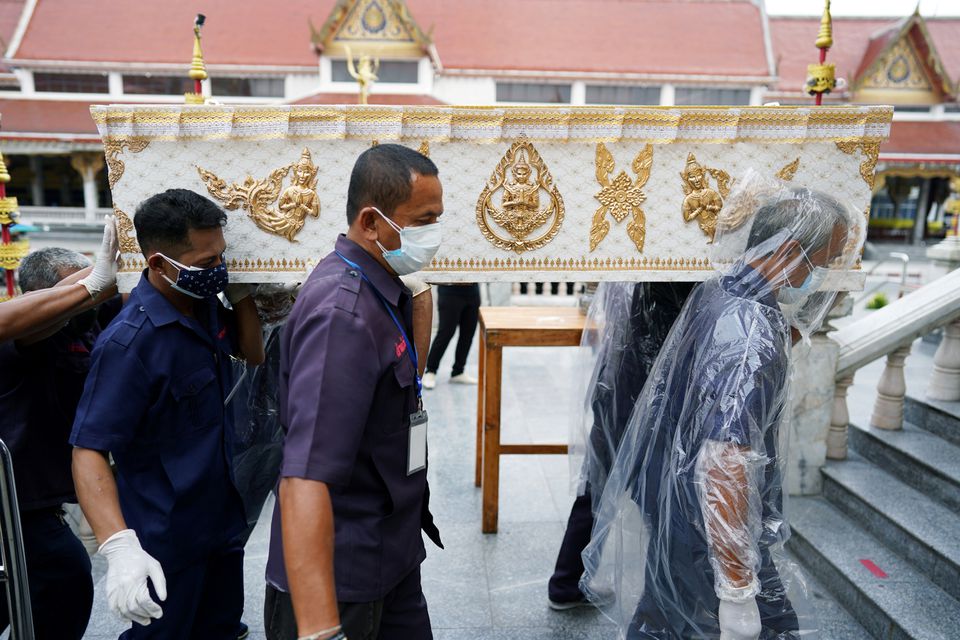 Temple workers carry a coffin containing a body of a man who died from the coronavirus disease (COVID-19) during his funeral at a temple in Bangkok, Thailand April 24, 2021. REUTERS/Athit Perawongmetha

Thailand’s government slapped restrictions on travel from India on Monday over concerns of imported coronavirus cases and closed more venues in Bangkok, even as it came under fire for not doing enough to contain a spike in infections.

The government has ordered parks, gyms, cinemas and day-care centres in its capital, the epicentre of the latest wave of infections, to shut from April 26 until May 9.

It has also introduced a fine of up to 20,000 baht ($635) for not wearing masks in public, with even the prime minister falling foul of mask-wearing rules.

But unlike last year, malls and restaurants have been allowed to operate with earlier closing times, fuelling concerns this could quickly lead to more infection clusters and prompting calls for the resignation of the country's health minister.

Comparing the government's Covid-19 response to playing a game of Whac-A-Mole, Thira Woratanarat, a professor at Chulalongkorn University's Preventive and Social Medicine, warned "shutting places and activities one at a time would not be enough".

People should prepare for more clusters especially in work places, food courts and public transportation, he cautioned in a post on Facebook.

Thailand has managed to keep its caseload lower than many countries, but the latest outbreak has resulted in 57,508 infections and 148 deaths in just under 30 days. It reported 2,048 new cases on Monday, of which 901 were in Bangkok.

"They shouldn't wait until there is a new outbreak to come up with regulations," said Ungkana Kesornphud, who owns a massage shop in Bangkok.

The president of Thailand's Thoracic Society, Nithiphat Chiarakun, also urged the government to take "decisive measures to stop the movement of people as quickly as possible".

An online petition on Change.org calling for the resignation of health minister Anutin Charnvirankul had garnered over 160,000 signatures in two days.

Anutin has said he will not resign.

The city of Bangkok fined Prime Minister Prayuth Chan-ocha 6,000 baht ($190) after he posted a photo of him not wearing a mask during a meeting.

The photo was later removed.

Thailand plans to procure more vaccines from several producers with a vaccination goal of 300,000 doses per day to inoculate at least 50 million people by end-2021, the prime minister posted.

Thailand has a population of about 66.1 million.

Thailand will consider additional restrictions later this week, Apisamai Srirangsan, a spokeswoman for its coronavirus taskforce said at a briefing, after the country announced curbs on travel from India where infections have set a global record for a fifth straight day.

The Thai embassy in New Delhi said in a statement that certificates of entry for non-Thai nationals travelling from India will be suspended until further notice.

"We confirm that no chartered flights from Indian millionaires have sought permission from the CAAT to come to Thailand," it said in a statement over the weekend.