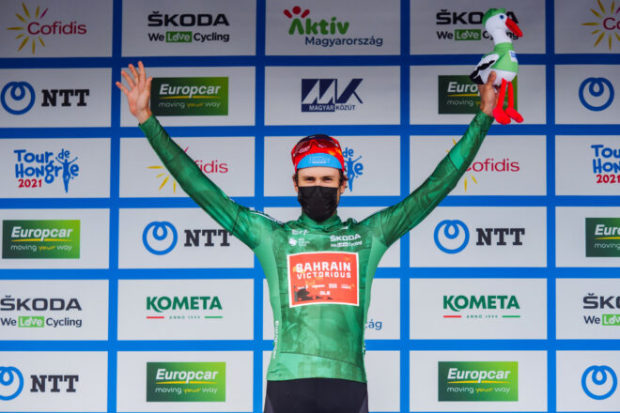 Bahrain Victorious secured the Green Jersey with Phil Bauhaus on their first appearance at the Tour de Hongrie.

The five-stage race over 792km and 7,954 verticle metres was also raced by the first-ever Bahraini in the pro peloton, Ahmed Madan.

Bauhaus secured the jersey with wins on the opening stage and stage 3, while Santiago Buitrago had a top-ten finish in the GC.

His Majesty King Hamad’s representative for humanitarian work and youth affairs Shaikh Nasser bin Hamad Al Khalifa praised Bauhaus, underlining that this victory is an extension of the accomplishments made by the team, representing Bahrain internationally.

He commended the efforts of all the team members and the technical staff as well as the administrators.

Bauhaus said, “In general, I think it was a successful race for us finishing in the top ten in GC, and I have two stage wins and the green jersey.

“Today with two wins, we wanted the third one. It was not easy today, and we are a bit disappointed as we went out a bit too early, and there was a slight headwind. Overall it was a good race.”

Ahmed Madan made history, being the first Bahraini represented in the pro peloton and was delighted by the experience: “Amazing first race with the team at Tour of Hungary over five stages. At the start, I felt a little bit nervous as I didn’t know what to expect. Day by day, with the help of the team, I felt better. I started working on the front with the team and helping the guys, and we had two victories and the green jersey, so I’m pretty happy with how the first race went.”

Sharing his thoughts on the week in Hungary, Sports director Neil Stephens said: “We placed fourth today was enough to solidify our lead in the green jersey competition, and we are pleased about winning that. In general, we had a really successful week. We came here to win one stage, and we won two. We also wanted to place highly in the GC, and we placed 10th. Finally, Ahmed was able to finish his first stage race in Europe and played an integral part in the success we achieved this week. Hopefully, this is a sign of great things to come for Ahmed and Bahrain Victorious.”