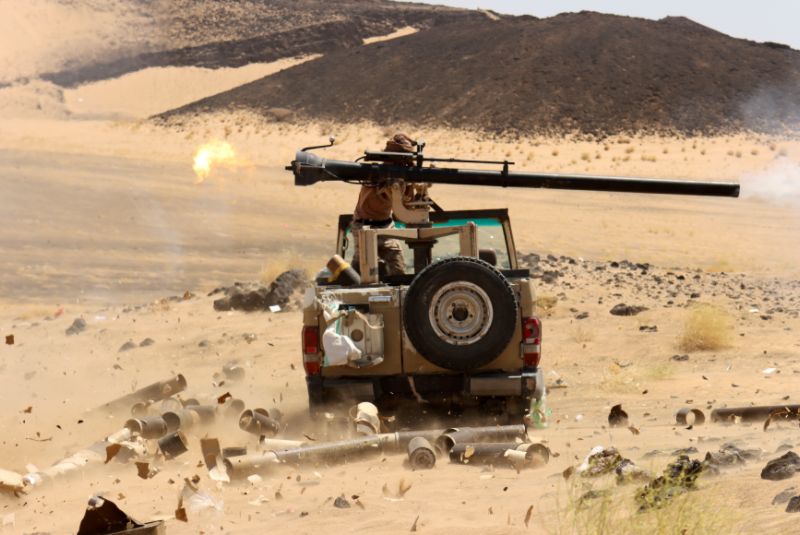 FILE PHOTO: Yemeni government fighter fires a vehicle-mounted weapon at a frontline position during fighting against Houthi fighters in Marib

A medical source said dozens of people, many of them badly burned, had been taken to Marib General Hospital and 12 of them had died of their injuries, including five children.

“The rest are receiving treatment and we expect the number of victims to rise,” the source added.

Confirming the explosion, the Marib Governorate blamed the incident on a missile fired by the Houthi militia fighting a Saudi-led coalition in Yemen’s civil war. It said on Facebook that 14 people had been killed.

The health and information ministers in the internationally recognised Yemeni government also blamed Houthis for the attack.

“More than 17 killed and injured, including this child burned by Houthi Rocket (attack) on Marib city today,” Health Minister Qasem Buhaibeh wrote on Twitter alongside a picture of a burned figure.

The Houthi forces could not be reached for comment.

The Marib region is the last northern stronghold of the government, which has been at war against the Iran-aligned Houthi forces since 2014.

A Marib resident said the explosion was near a fuel station in the Shabwani market on the outskirts of Marib.

“The fire broke out while many people were there and there was a large number of casualties. Ambulances and firemen came and many of the injured were taken to hospital,” the resident said.

Saudi state TV El Ekbarayia quoted the Yemeni army as saying Houthis had “targeted civilians in Marib with a ballistic missile and a drone.” Yemen’s information minister, Moammar Al Eryani, made similar accusations and put the death toll at 17.

Fighting over Marib and its vast gas fields has killed thousands of fighters from both sides and threatened years of peace efforts.

The US has accused the Houthis of worsening Yemen’s humanitarian crisis by attacking Marib.

The civil war, which has been in a military stalemate for years, has killed tens of thousands of people and pushed Yemen to the brink of famine. The Houthis say they are fighting a corrupt system and foreign aggression.