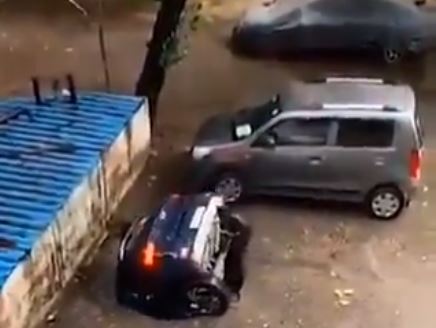 The car is seen being swallowed up by the sinkhole at the parking lot, captured by its owner, Dr Kiran Dhosi. (Image credit: @SuboSrivastava, instagram)

#MumbaiRains
Car swallowed completely by a sinkhole in residential complex in Mumbai.. Later discovered that it was a covered well under a parking lot! pic.twitter.com/nvLct0QqfU

This video of a Hyundai car went viral on Sunday after it was seen being swallowed into a sinkhole at a parking lot on a Ghatkopar residential society premises.

The car's owner, 67-year-old Dr Kiran Doshi, shot the video himself. Police remarked that the parking lot was built over an old well about 40 years ago, while the building itself was built 80 years ago.

Authorities began pumping water out of the old well to locate the car, which was finally removed at 9 pm at night.

One officer remarked: “We removed the water from the well using pumps and after we spotted the vehicle, we lifted it with the help of a crane.”

Senior Police Inspector Nagraj Manjre of the Ghatkopar traffic division said, “We think that the concrete structure weakened over the years and heavy rainfall led to the incident.”