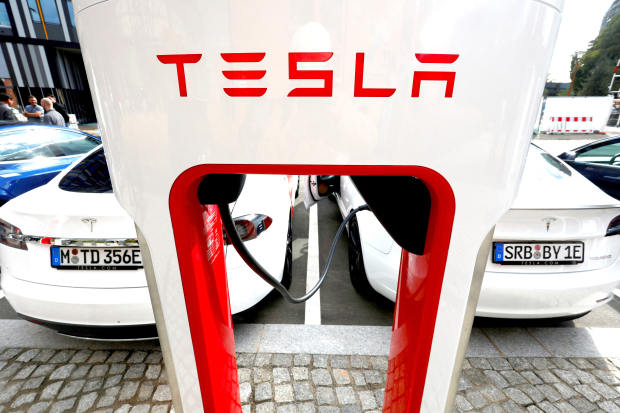 FILE PHOTO: The company logo of Tesla cars is seen on the V3 supercharger equipment during the presentation of the new charge system in the EUREF campus in Berlin, Germany September 10, 2020. REUTERS/Michele Tantussi/File Photo

NEW YORK: Tesla Inc yesterday posted record vehicle deliveries for the second quarter that were in line with Wall Street estimates as the electric-car maker coped with a shortage of chips and relied on sales of its cheaper models.

Now eyes are on its second-quarter earnings to see whether recent drops in bitcoin prices would have an adverse affect on Tesla’s bottom line, due to Tesla’s exposure to the cryptocurrency’s volatility.

Tesla delivered 201,250 vehicles in total during the second quarter. Analysts had expected Tesla to deliver 200,258 vehicles, according to Refinitiv data.

“It was a solid quarter to volume wise, but I view it as a modest disappointment,” Garrett Nelson, an equity analyst at CFRA Research, said.

Shares of the company were traded flat, after rising as much as 3.3 per cent in early trading on Friday.

Tesla bulls cheered the results. “This morning the Street was bracing for bad news and the bulls instead got an early July 4th weekend positive surprise,” said Dan Ives, an analyst at Wedbush Securities.

The numbers showed that strong deliveries of its Model 3 sedans and Model Y crossovers, its two lower priced variants, offset a drop in deliveries of higher-end Model S and X variants.

Tesla has been raising prices for its vehicles in recent months, which its billionaire boss, Elon Musk, blamed in May on “major supply chain price pressure”, especially raw materials.

He also said in early June that “Our biggest challenge is supply chain, especially microcontroller chips. Never seen anything like it.”