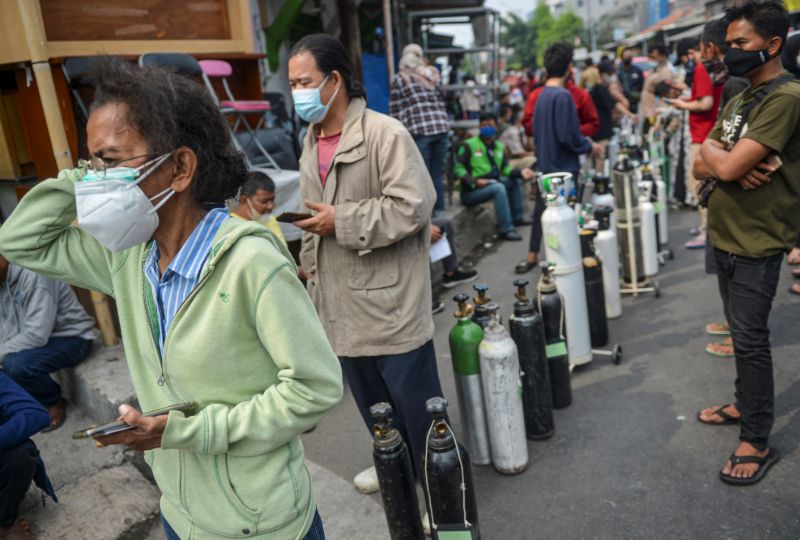 People wearing protective face masks stand with their oxygen cylinders to get them refilled for free amid a surge of the coronavirus disease (COVID-19) cases in Jakarta, Indonesia, July 15, 2021.

Indonesia is already grappling with a "worst-case scenario" COVID-19 situation, a senior minister said on Thursday, adding the government was preparing for a further climb in cases as the more virulent Delta variant continues to spread.

The world's fourth most populous country is struggling to slow virus transmission even after imposing its toughest mobility curbs so far. Indonesia began its vaccine rollout in January, but only about 5.8% of its 270 million people have received both shots.

Wednesday's tally of more than 54,000 cases was the latest of many peaks in the past month, and up more than tenfold on the number of infections at the start of June.

Daily infections on Wednesday also surpassed those in India, which has seen a sharp drop in cases after suffering one of the world's worst COVID-19 outbreaks earlier this year.

The government has converted buildings into isolation facilities, deployed fresh graduate doctors and nurses to treat COVID-19 patients and imported oxygen and drugs, he said.

Indonesia's food and drug agency (BPOM) has authorised the anti-parasitic drug ivermectin for emergency use against COVID-19, a health ministry official told Reuters. BPOM did not immediately respond to request for comment.

While the World Health Organization, as well as European and U.S. regulators, have recommended that the drug should not be used for COVID-19 patients, it is being used to treat the respiratory disease in some countries, including India.

Hospitals in Indonesia's most populated Java island have been deluged in recent weeks, with many people struggling to get treatment and hundreds dying while self-isolating.

Cases and bed occupancy rates also have risen in parts of Sumatra and Kalimantan and more remote regions like West Papua, where health facilities are less equipped to handle an outbreak.

Luhut also said that vaccine efficacy was weaker against the Delta variant that accounted for most infections on Java island, but urged people to get inoculated to help prevent serious illness and death.

The government was analysing the situation and would decide whether to extend the current emergency coronavirus curbs that will expire on July 20, he said.

Meanwhile, Indonesia's COVID-19 task force said there has been a low adherence to health protocols despite the mobility curbs.

The KSPI labour union estimated more than 10% of workers in the manufacturing sector had become infected and many had died.

"This is very worrying and endangering the survival of the business world and the lives of workers," KSPI chairman Said Iqbal told a news conference, warning coronavirus curbs had not stopped factories from continuing to operate at 100% working capacity.