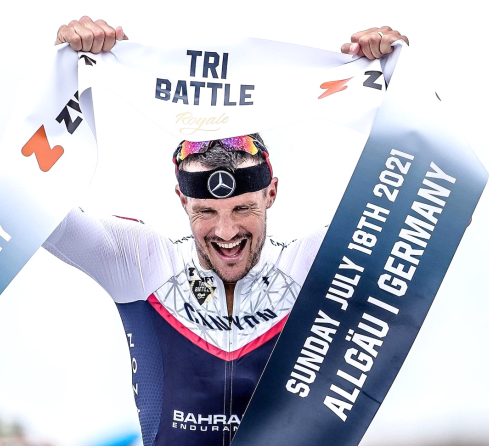 The three-time Ironman world champion and Beijing Olympic gold medallist blazed through the Tri Battle Royale’s 3.8-kilometre swim, 180km bike, and 42.2km run in 7:27:53, a full 7 minutes and 46 seconds faster than the previous record he set at Challenge Roth in 2016.

“If you haven’t done an ironman for two years, you race it like a 70.3 and that’s a mistake in the beginning,” said Frodeno post-race, chuckling. “It was so tough because it was cold, it was rainy… The truth is, it’s not exactly what’s referred to as ‘Frodeno weather.’ Sorry to everybody who came out and endured the conditions. It was just amazing to do this kind of thing. It was so clinical because you never had to look up and could just try and go as fast as possible.”

Though many speculated current Ironman World Champion Daniela Ryf would shatter Chrissie Wellington’s 8:18:13 world record at Roth, the Swiss athlete did not set out with the same intentions as Frodeno. Ryf, who entered the competition at the last minute, came to Roth simply to shake off a disappointing DNF at Ironman Frankfurt two weeks prior.

Though Ryf was untouchable the entire day, a skirmish for the remaining podium spots ensued in the stacked women’s field. Exiting the water 3 minutes down from Ryf was a chase pack containing Italian Michela Menegon, Australian Carrie Lester and German Anja Beranek. Six minutes down, a larger pack, including Michelle Vesterby of Denmark, Jenny Fletcher of Canada, and 2015 Roth champion Yvonne Van Vlerken (NED) gave chase.

Halfway around the globe, Tyler Mislawchuk won the America’s Triathlon Cup Long Beach to put the finishing touches on his preparation for racing the world’s best in just over a week’s time.