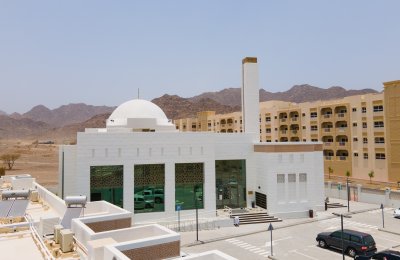 Dubai Electricity and Water Authority (Dewa) has announced the opening of Hatta mosque,  the world’s first mosque to receive the platinum rating for green buildings by the Leadership for Energy and Environmental Design (LEED v4) from the US Green Buildings Council (USGBC) with 83 points.
The mosque in Hatta can accommodate more than 600 worshippers on an area of 1,050 square metres according to the highest environmental sustainability standards.
The mosque comprises a 25-m-high minaret, parking facilities for cars and bicycles and special facilities for People of Determination, and a green charger station. The mosque conserves around 26.5 percent of energy and 55 percent of water.
According to Dewa, solar photovoltaic panels are currently being installed and a water treatment unit to reuse the water for irrigation and cleaning.
Dewa followed the highest international standards to ensure the air quality by using a highly efficient device for air purification to provide a sustainable and healthy environment inside the mosque, with recycled materials used for construction.
On the 'green' mosque building, Saeed Mohammed Al Tayer, the managing director and CEO, said: "Dewa works to promote the concept of zero energy buildings which supports sustainable development, economic growth without harming the environment and its resources."
"Inaugurating the world’s first mosque to receive the platinum rating for green buildings by the Leadership for Energy and Environmental Design in Hatta, is part of Dewa’s efforts to support the comprehensive and sustainable development plan of Hatta and meet the needs of its social, economic and environmental development," added Al Tayer.
"The Islamic Affairs and Charitable Activities Department is committed to protecting the environment. This supports the UAE's efforts in combating climate change," remarked its
Director General Dr. Hamad Al Sheikh Ahmed Al Shaibani.
The mosque, a first of its kind in the world, is a pioneering example for adopting best sustainability practices and preserving natural resources for a better environmental future," he noted.
"Receiving the LEED Platinum certification confirms that the mosque has met all international sustainability standards and achieved high levels of efficiency," said Al Shaibani.
"IACAD undertakes a globally-orientated mission focused on promoting the values of moderate Islam, developing charitable work and building mosques in accordance with international best practices. The inauguration of the mosque reflects the distinguished initiatives that prioritise sustainable practices and human health," he added.