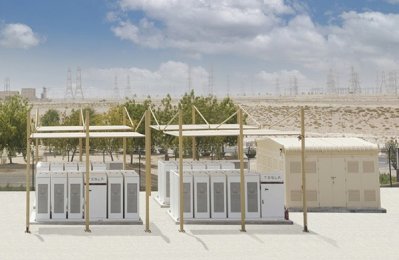 “This supports our efforts to achieve the Dubai Clean Energy Strategy 2050, which aims to provide 75% of Dubai’s total power capacity from clean energy sources by 2050 and make Dubai a global hub for clean energy and a green economy.

“The pilot project will evaluate the technical and economic capabilities of this technology within the operational framework of electricity systems in solar photovoltaic power plants. It also tests the role of this technology in the integration between clean energy and energy storage to achieve maximum efficiency and reliability,” added Al Tayer.

Al Tayer noted that Dewa is implementing other energy storage projects. These include using Concentrated Solar Power (CSP) in the 4th phase of the Mohammed bin Rashid Al Maktoum Solar Park, which combines CSP and photovoltaic solar panels with a production capacity of 950MW. The project will have the world’s largest global thermal storage capacity of 15 hours, facilitating energy availability round the clock. Dewa is also implementing a 250MW pumped-storage hydroelectric power station in Hatta, the first of its kind in the Arabian Gulf region

It will generate electricity using the water stored at Hatta Dam with a storage capacity of 1,500 MWh. In collaboration with Expo 2020 Dubai and Siemens Energy, Dewa has inaugurated the Green Hydrogen project, the first of its kind in the Mena region to produce green hydrogen using solar power. The project was implemented at the outdoor testing facilities of Dewa’s R&D Centre at the solar park.