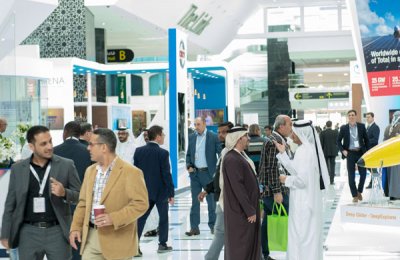 A previous edition of the World Future Energy Summit expo
The World Future Energy Summit will host innovations from around the world, as well as international technology pavilions from Germany, Switzerland, Italy, Netherlands, France, Austria, Nigeria, India, Japan, Korea and China.
To be held from January 17 to 19, 2022 at the Abu Dhabi National Exhibition Centre (Adnec) as part of Abu Dhabi Sustainability Week, the prestigious, sustainability-focused global platform hosted by Abu Dhabi Future Energy Company “Masdar”, will bring together world leaders from government, technology, energy to showcase clean energy solutions.
World Future Energy Summit is the world’s leading business event on the renewable energy industry’s annual calendar, and it’s more relevant now than ever.
Following COP26, where global economies are expected to layout plans for decarbonisation the World Future Energy Summit will enable the brightest minds in the business to meet, exchanging ideas and showcasing new innovations that will support the development of a sustainable future.
World Future Energy Summit is perfectly timed, especially as the GCC begins to diversify its energy mix and a regional charge on use of renewable energy sources. In the region, more countries have committed to building major infrastructure projects that significantly reduce reliance on fossil fuels, with green hydrogen generation projects emerging as the crown jewel of these efforts.
In Oman, plans are under way to build a $30 billion plant that will be the world's largest green hydrogen production facility at its completion. The plant is expected to be at full capacity in 2038, powered by 25GW of wind and solar energy.
Further north, Saudi Arabia's high-tech coastal city of Neom is the site to an equally proactive effort in the race for green hydrogen production, as Air Products and its partners work to deliver a $7 billion renewable energy-powered green hydrogen-based ammonia production facility by 2025.
Furthermore, the United States plans to investment an additional $550 billion in clean energy, with China having already issued green bonds with a value of $154.7 billion.
In the UAE, Masdar aims to develop with its partners Siemens Energy and Marubeni a green hydrogen demonstrator plant at Masdar City.
Masdar's parent company Mubadala, alongside Abu Dhabi National Oil Company (Adnoc) and holding company ADQ, also agreed earlier this year to form a hydrogen alliance to produce green and blue variants of the fuel.
In Dubai, the first solar-driven green hydrogen production facility in the Mena region has already been inaugurated, with a total investment of $11 million.
The pilot project will produce 20.5kg/hour of hydrogen at 1.25MWe of peak power, in line with the Dubai Clean Energy Strategy 2050 and epitomising the public-private partnerships widely viewed in the industry as the most efficient way to move forward.
As the centrepiece of World Future Energy Summit 2021, the Energy Expo will be vital in accelerating this already fast-paced industry. The Energy Expo will host some of biggest names in renewable energy, including Taqa, EDF, Engie and EWEC as exhibitors. The Solar & Clean Energy Forum will host industry leaders as speakers and panellists, including: Bruce Stedall, Asset Management Director, Transco; Dr Emmanouil Kakaras, Executive Vice President Next Energy Business at Mitsubishi Heavy Industries EMEA; Mothana Bahjeat Qteisha, Senior Managing Director, MEA & APAC, Jinko Solar amongst others.
Capitalising on this undeniable momentum is extremely important for bold, forward-thinking investors, and Grant Tuchten, Group Event Director for World Future Energy Summit, said the Energy Expo & Forum will be beneficial for anyone in attendance. “Renewable energy is the central focus of the exhibition” he remarked, “where government officials and decision makers are together with the engineers and scientists who are developing exciting new technologies to facilitate business discussions resulting in beneficial partnerships.
Mohamed AlNowais, Managing Director of AMEA Power, a key exhibitor at the World Future Energy Summit, added: “The future of energy is no longer an ambition: it is an urgent imperative. As a pure-play renewable power developer AMEA Power is working relentlessly on that imperative. As we look for all opportunities to speed up our green growth, we very much look forward to being at the 2022 World Future Energy Summit in Abu Dhabi – finally meeting in one place with many key stakeholders. WFES Abu Dhabi has been for years the venue of choice for top industry professionals, and we are exceptionally excited to be there in person again.”
On a similar note, Energy Systems CEO of DNV, Ditlev Engel, said: "The world needs to make this a decade of deep decarbonisation, overcoming the urgent and complex challenge of transitioning to a clean-energy system. The scale and pace required is framed by the Paris Agreement – limiting global warming to well below 2ºC, striving towards a limit of 1.5ºC above pre-industrial temperatures by the end of the century – but to achieve that the right decisions have to be made today. Our 12,000 colleagues globally are prepared to help organisations in tackling the energy transition so we can all do our part to deliver. The World Future Energy Summit brings an opportunity to gather and keep moving forward the transformation.”-- TradeArabia News Service