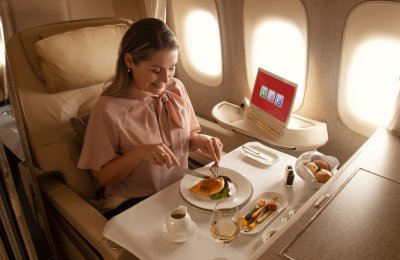 Emirates has been recognised as the Middle East's Leading Airline in four key categories at this year’s World Travel Awards 2021.
The categories are: Leading Airline First Class; Leading Airline - Brand; Leading Airline Lounge - Business Class and Leading Airline Rewards Programme for its Skywards programme.
The awards for this year came on the back of record month-on-month voting figures from tourism consumers across the industry, demonstrating the upswing in travel recovery and the recognition that Emirates has received from travellers for its consistent efforts to deliver outstanding products and services at every point of the travel journey, the airline said.
In the past year, Emirates accelerated many of its digital initiatives to provide customers with a safe and seamless experience when they fly. Emirates was the first airline to implement the IATA Travel Pass across six continents and by the end of this month, the digital verification solution will be available to customers across the airline’s network of over 120 destinations.
The airline has also been a trailblazer in a completely touchless airport experience, starting with the world’s first complete biometric journey, which now includes over 30 biometric cameras in active operation at its Dubai airport hub, from check-in counters, to the entrances of its First and Business Class lounges and at select boarding gates. In addition, the airline has introduced the option of self check-in and bag drop kiosks for all customers, with six stations in its Business and First Class check-in area, and 24 in the Economy Class check-in area.
In August, the airline created a worldwide buzz when it stood a stuntwoman dressed in Emirates cabin crew uniform at the pinnacle of the Burj Khalifa, the tallest building in the world, holding message boards that welcomed the resumption of travel. The bold stunt conveyed the awe-inspiring feeling of being at the “top of the world” when one can fly again. At 828 metres above ground, this was one of the highest ads ever filmed.
Also at the top of its game in the digital world, Emirates this year became the first airline to launch a virtual reality app in the Oculus store, the world’s most popular VR platform. This industry-first initiative allows customers and fans of the airline to explore its award-winning First Class Suite and other cabin products in a full VR experience.
One of few international airlines to invest in its own signature lounges, Emirates has steadily re-opened its lounges in Dubai and also around its network for its First and Business Class customers and frequent flyers. At its Dubai hub, Emirates expanded its offering even further than what was available pre-pandemic. This includes select brand partnerships, menus with a multitude of meal options reflecting the latest trends and taste preferences, and much more.
Emirates’ First Class private suites have remained the industry gold standard since it was first introduced in 2003, and this ultimate experience in luxury and privacy has been regularly enhanced and refined over the years. Emirates’ First Class A380 experience includes its famed Onboard Lounge and a Shower Spa at 40,000 feet, while fans of Emirates’ Boeing 777 can enjoy the unique Emirates Boeing 777 Game Changer fully-enclosed First Class suite, which boasts a number of industry firsts, like virtual windows, zero-gravity seat positions, as well as personal climate and mood lighting controls. Over the past year, Emirates has fully restored its signature First Class services onboard.
Over the last year, Emirates Skywards introduced added benefits for its members, and expanded the umbrella of its partnerships. Recently, the loyalty programme launched an online subscription platform, “Skywards+”, to offer its 27 million members easy access to customised rewards. Skywards Exclusives, a unique airline loyalty initiative, is also offering members exclusive experiences at the ICC Men's T20 World Cup, Formula 1 Grand Prix and thrilling football matches. Registered members can also earn a mile a minute during a stopover or holiday stay in Dubai, for up to 5,000 Miles, it said
Emirates Skywards was one of the first loyalty programmes in the world to offer a generous tier extension until 2022, and the programme continues to roll out more ways for members to earn Miles in the air and on-ground, including retail shopping and on co-branded credit card spends.
The annual World Travel Awards is a prestigious event that acknowledges, rewards and celebrates organisations within the travel, tourism and hospitality sectors, and is recognised as a hallmark of industry excellence. -TradeArabia News Service