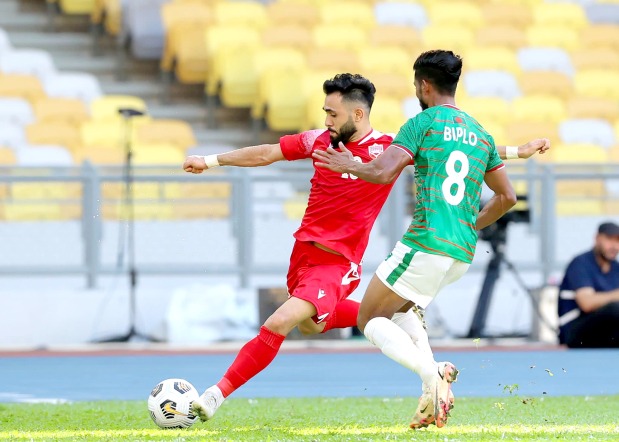 Bahrain cruised to a comfortable 2-0 victory over Bangladesh yesterday in their opening Group E game of the Asian Football Confederation (AFC) Asian Cup 2023 Qualifiers Final Round at the Bukit Jalil National Stadium in the Malaysian capital, Kuala Lumpur.

“It is very important to win the first game of these short competitions,” Bahrain coach Helio Sousa, a former Portuguese international, said at a press conference after the game. “Expectations are high and all the involved teams are battling to get the first and second places in their group so they can progress to the next stage.”

Bahrain were in control of the game from the start and could have walked away with a larger victory margin. But they were denied more goals by the brilliance of the Bangladeshi goalkeeper, Anisur Rahman in the first 20 minutes of the game.

Rahman first pulled off a diving save to knock Bahrain full-back Amine Benadi’s header out, before holding on to a free kick by right-winger Komail Al Aswad and then punching away a smash by forward Ali Haram that looked, for all purposes, destined to end up in the net.

But Bahrain were relentless in their attack and their efforts paid off in the 33rd minute when an Al Aswad corner-kick was headed into the goal by Haram with Rahman stuck at the far end.

Just eight minutes later, Al Aswad was in the action again when he sprinted to intercept Bangladesh midfielder Rakib Hossein’s headed clearance and sent the ball zooming into the goal with Rahman and the Bangladeshi defenders caught wrong-footed.

Bahrain finished the first-half 2-0 ahead and could have made it 3-0 early in the second half when Al Aswad, who seemed to be everywhere, sent the perfect pass to forward Abdulla Yousuf, who had only the goalkeeper to evade. But Rahman, once again, proved difficult to beat as he grabbed a Yousuf mishit comfortably.

“We knew that we had short spaces in the Bangladesh midfield to play inside,” Sousa explained at the press conference. “So we knew we had to be patient and try to conquer the corridor space so that we could shoot or cross, and to get our chances.”

He added that the Bahrain camp were not surprised by the battling performance by Bangladesh.

“We knew they’re strong in offensive positions, strong on corners and throw-ins,” Sousa said. “We were prepared for those situations.”

Bahrain are scheduled to play Malaysia on Saturday before taking on Turkmenistan next Tuesday, playing three games inside six days which, Sousa said, was not ideal.

“Three games in six days on the same pitch makes it difficult for any team,” he said. “But we must forget about that and focus on giving our best. We can’t use that as an excuse if we don’t perform well.”

Six teams topping their groups will qualify for the 2023 AFC Asian Cup, along with five best second-placed teams. Fourteen teams have already qualified for the tournament, which is scheduled for June next year and was due to be hosted by China but, because of a coronavirus outbreak earlier this year, will now be held in another, as yet undecided country.