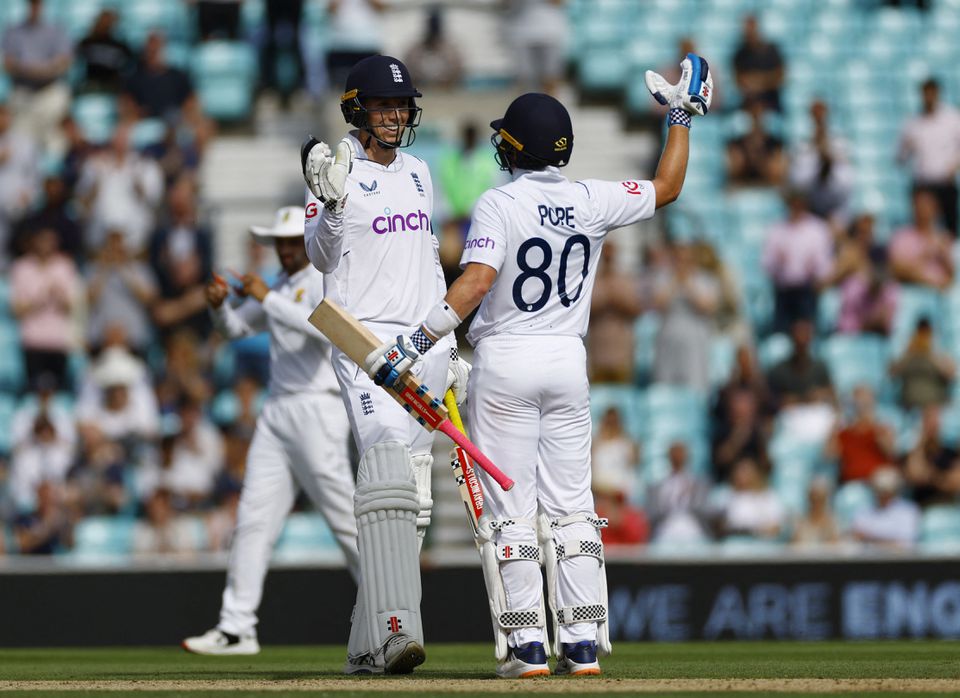 Zak Crawley and Ollie Pope steered England to an impressive nine-wicket victory over South Africa at The Oval on Monday to complete a 2-1 series victory and put the seal on an astonishing turnaround in fortunes for the home team this year.

England started the day at 97-0 needing another 33 to win and picked them up in 27 minutes for the loss of Alex Lees for 39. Crawley finished on 69 not out, with Pope unbeaten on 11.

The victory made it six wins from seven tests this summer, following a 3-0 beating of New Zealand and a win over India, all following an awful run that brought one win from the previous 17 tests and led to the arrival of Ben Stokes as captain in place of Joe Root.

"It's been a great series for us as a team, there were no real individual stand-out performances, but different people at different times have broken the game open," Stokes said at the post-match presentation.

"The conditions we found on day one, the toss is one you want to win, but you have to execute your plans.

"When you've got the bowlers like Jimmy (Anderson), (Stuart) Broad and Robbo (Ollie Robinson) with the skills they possess, they've been phenomenal."

England had reached 97 chasing 130 before bad light stopped play on Sunday's fourth day, with Crawley racing to an impressive 57 and Lees, who had been dropped from the first ball of the innings, on 32.

On Monday a small but healthy crowd took advantage of free entry to observe the last rites, in stark contrast to Sunday when a full house was treated to an amazing day's action.

The two openers, under considerable pressure after regularly failing to establish any sort of platform this year, had maintained England's aggressive approach on Sunday to effectively make the game safe.

The 100 partnership came up in the first over on Monday, the 18th of the match, and was England's fastest ever for the first wicket.

However Lees, twice dropped in the slips in the first two overs of the day, fell lbw to Kagiso Rabada for 39 in the third after a review overturned the umpire's not out decision.

There were no further scares though as Crawley thumped a stylish back foot cover drive to the boundary to finish the match and earn a huge personal confidence boost.

It was the third time in a row the test had effectively taken less than three days, after Thursday's play was washed out by rain and Friday was cancelled as a mark of respect following the death of Queen Elizabeth.

On Sunday South Africa's inexperienced batting lineup had no answer to England's swinging seam attack, slumping from a strong start to 169 all out to hand the initiative to the hosts.

"First innings runs are so big in the UK and we've failed in that department," South Africa captain Dean Elgar said.

"It was a tough decision (to select the top six) and it didn't work this game, but it was an eye-opening experience for those guys.

"I've got to give our bowlers credit, they ran in and did all that was asked of them, but it all boils down to our batting."