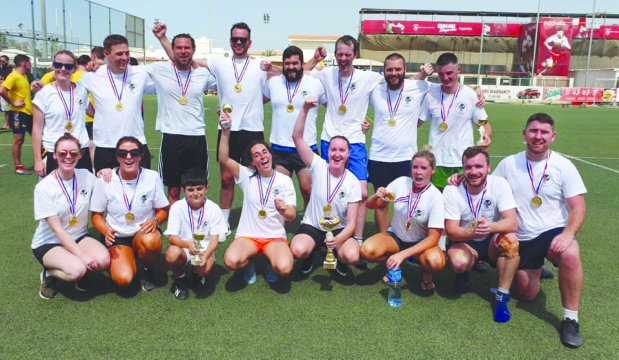 Members of the White Hall team

THE White Wall team were crowned Arabian Celts Champions League Winners for 2019 after upsetting the previously unbeaten Good as Golds in a pulsating final at Bahrain Rugby Football Club in Saar.

Despite losing their opening two matches in the round-robin stage of the competition – including a convincing defeat to their cup final opponents – the White Wall timed its run of form to perfection and earned a place in the final thanks to victories over the Mighty Blues and the Simple Reds.

As has become tradition for Champions League, the final was played out in scorching temperatures and pitted two of the stars of the Arabian Celts Ladies’ march to the Middle East Intermediate League and Championship double, in the form of Siobhan Brosnan and Jane Healy, as opposing captains.

Ultimately though, it was Brosnan who earned the bragging rights for the year as her team, inspired by Noelle Djennadi and Gerry Arthur – later presented with the respective ladies’ and men’s MVP awards for the tournament – came out on top thanks to a clinical first-half display.

After a series of tasty battles between the two sides through the group stages, this one lived up to expectations but in the end, it was the Blues that emerged victorious, thanks in no small part to the scoring prowess of rugby convert Rob Bennett.

All-in-all, another hugely successful tournament for the Arabian Celts club in what has been a notable season on a number of levels.

The Celts will round off the year with their annual End-of-Season Awards night next weekend before the summer break.