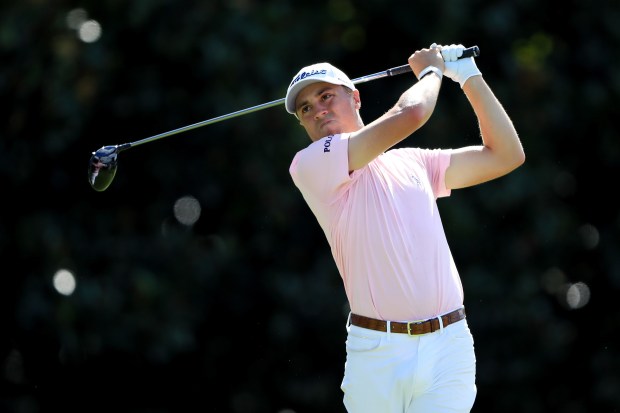 ATLANTA, GEORGIA - AUGUST 22: Justin Thomas of the United States plays his shot from the 14th tee during the first round of the TOUR Championship at East Lake Golf Club on August 22, 2019 in Atlanta, Georgia. Sam Greenwood/Getty Images/AFP == FOR NEWSPAPERS, INTERNET, TELCOS & TELEVISION USE ONLY ==

ATLANTA: Justin Thomas missed two short putts in a mediocre even-par 70 on the first day at the Tour Championship on Thursday but ended the round tied for the lead with fellow Americans Brooks Koepka and Xander Schauffele.

Thomas was grateful for the unique staggered scoring system, which afforded him a headstart at 10-under-par thanks to his top seeding as FedEx Cup points leader entering the season-ending event at East Lake in Atlanta.

Third seed Koepka birdied three of the last four holes to card 67 and Schauffele had a 64, the day’s best round by two strokes.

The winner on Sunday will receive $15 million, the sport’s biggest payout.

Thomas was grateful for his lofty position after finding the punishing rough several times, and also pushing his tee shot into water for double-bogey on the par-three 15th.

Add in a couple of missed three-footers and it could have been a lot worse.

The runaway winner of last Sunday’s BMW Championship said he had paid a price for his slight inaccuracy off the tee, even if his misses were not very far off line.

“The difference between fairway and rough out here ... is so huge,” he said.

“To come in the house at 10-under feels pretty good. I thought I played better than I scored.

“I played a lot of good golf the last five or six holes other than that dumb mistake on 15.

“I still can’t believe those two short putts. I hit them right where I wanted.”

World number one Koepka said it had been “weird” teeing off three shots from the lead on the first day, but thinks the tournament will feel more normal from now on.

He found some confidence on the greens by sinking a 25-footer at the fourth and then almost holed his approach shot at the next for a tap-in birdie.

Joint leader Schauffele won the 2017 Tour Championship by shooting the best score over 72 holes under the regular scoring system.