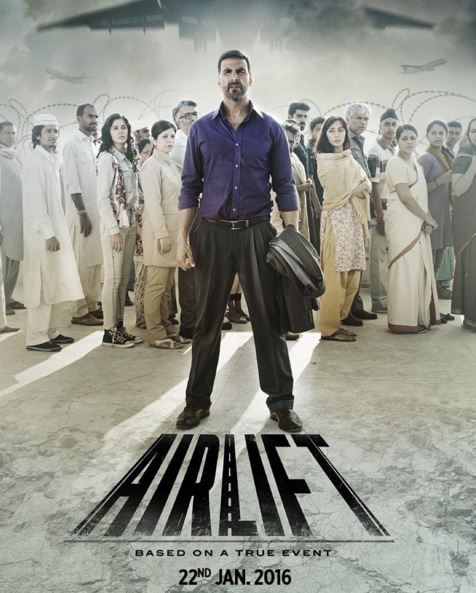 Action hero Akshay Kumar may be the lead actor of Raja Krishna Menon's Airlift, but the real star of this riveting and rousing thriller is undoubtedly the near-perfect screenplay.

Based on true events masterminded by an unsung hero, Airlift tells, with controlled flair, the story of the biggest human evacuation in history.

Filmed primarily in Ral al-Khaimah, which is passed off as Kuwait City, the film follows an Indian business tycoon whose world comes crashing down when Saddam Hussein's army invades Kuwait in August 1990.

The entrepreneur, Ranjit Katyal (Kumar), has the all the wealth and the connections to be able to flee the conflict zone with his wife Amrita (Nimrat Kaur) and his little daughter.

But despite the fact that he does not have much love lost for the country of his birth, he chooses to stay back and use his clout to help the 1.7 lakh Indians stranded in Kuwait survive the ordeal.

Katyal inevitably faces many daunting obstacles, not the least of which is the bureaucratic sloth back in New Delhi, but he refuses to give up until he has achieved his end.

His long distance telephonic exchanges with an MEA joint secretary (played by Kumud Mishra), constitute an import component of the tale and proffers an illuminating commentary of how things work in India.

Airlift narrates the dramatic story of an evacuation carried out over a period of two months and with the help of as many as 488 flights a glorious chapter in India's civil aviation history.

But director Raja Krishna Menon does not take recourse to conventional narrative methods and keeps the flow of the narrative on a tight leash.

His approach enhances the emotional impact of the struggles of Katyal and his wife to ward off the huge challenges that they and the people in their charge are up against.

Airlift remains a thoroughly real and believable story all the way through. It is helped along by the quality of Kumar's impressive star turn.

The lead actor receives outstanding support from the rest of the cast, especially from Nimrat, who delivers a phenomenally impactful performance.

Airlift is particularly special because it is not a typical chest-thumping tribute to the valour of the great Indians who pulled off the impossible in the face of great adversity.

The director informs his immersive recreation of the saga with moving doses of humanity, which ensures that the film achieves far more than merely the effect of filling Indians with pride.

One of the victims of the Iraqi invasion that Katyal, with assistance from accomplice Ibrahim Durrani (Purab Kohli), saves is Tasneem (Feryna Wazheir), a Kuwaiti woman surreptitiously sheltered in the refugee camp set up by him.

Moments like these bring out the protagonist's innate humanism, rather than just his accidental heroism.

Airlift is anything but an average Bollywood films about a virile patriot seeking immortality by felling evil enemies.

Katyal's greatness lies in his ability to conquer his own fears, doubts and weaknesses and push the limits of endurance.

He is a true hero and Airlift does full justice to him.