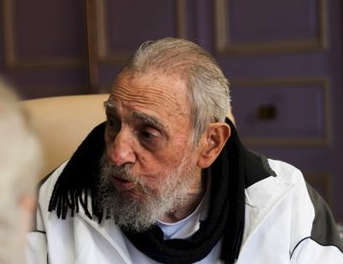 Havana: Retired leader Fidel Castro accused US President Barack Obama of sweet-talking the Cuban people during his visit to the island last week and ignoring the accomplishments of Communist rule, in an opinion piece carried by all state-run media.

Obama's visit was aimed at consolidating a detente between the once intractable Cold War enemies and the US president said in a speech to the Cuban people that it was time for both nations to put the past behind them and face the future "as friends and as neighbours and as family, together."

"One assumes that every one of us ran the risk of a heart attack listening to these words," Castro said in his column, dismissing Obama's comments as "honey-coated" and reminding Cubans of the many US efforts to overthrow and weaken the Communist government.

Castro, 89, laced his opinion piece with nationalist sentiment and, bristling at Obama's offer to help Cuba, said the country was able to produce the food and material riches it needs with the efforts of its people.

"We don't need the empire to give us anything," he wrote.

Fidel Castro took power in a 1959 revolution and led the country until 2006, when he fell ill and passed power to his brother Raul Castro. He now lives in relative seclusion but is occasionally heard from in opinion pieces or seen on television and in photos meeting with visiting dignitaries.

The iconic figure's influence has waned in his retirement and the introduction of market-style reforms carried out by Raul Castro, but Fidel Castro still has a moral authority among many residents, especially older generations.

Obama did not meet with Fidel Castro during his three-day visit, nor mention him in any of his public appearances. It was the first visit of a sitting US president for 88 years.

Fidel Castro blasted Obama for not referring in his speech to the extermination of native peoples in both the US and Cuba, not recognising Cuba's gains in health and education, and not coming clean on what he might know about how South Africa obtained nuclear weapons before apartheid ended, presumably with the aid of the US government.

"My modest suggestion is that he reflects (on the US role in South Africa and Cuba's in Angola) and not now try to elaborate theories about Cuban politics," Castro said.

Castro also took aim at the tourism industry in Cuba, which has grown further since Obama's rapprochement with Raul Castro in December 2014. He said it was dominated by large foreign corporations which took for granted billion-dollar profits.

After Obama's visit, major obstacles remain to full normalisation of ties between Cuba and the US, with no major concessions offered by Cuba on rights and economic freedom.