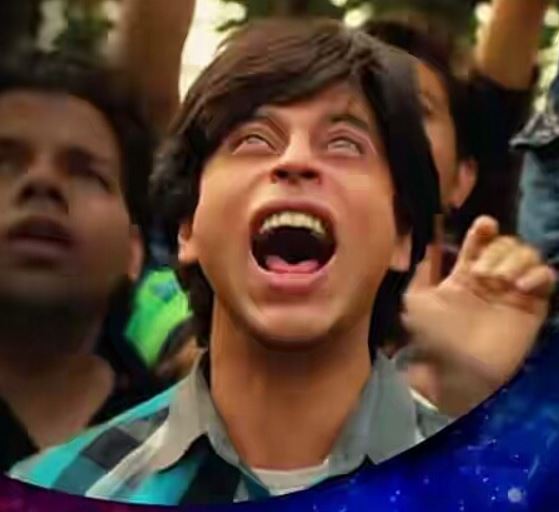 Fan is Shahrukh Khan's film all the way but that is stating the obvious.

What might, however, not be all that apparent is that it is a good idea that the Bollywood superstar has decided to look for new challenges as an actor.

Playing a character that is nearly half his age, SRK, aided no doubt by meticulous make-up, rolls back the years rather convincingly.

If only, all the effort was in the service of a more compact film, the final outcome might have been infinitely more salutary.

That is not to say that Maneesh Sharma's Fan is not likely to win the fans over. It definitely will because it offers the audience not one, but two SRKs.

One is the superstar playing a fictional superstar called Aryan Khanna. The other is the actor essaying the role of a middle class Delhi boy Gaurav Chandna, who looks like him and literally worships him.

Aryan Khanna is an integral part of Gaurav's otherwise humdrum life. The young man dances to his songs and delivers his dialogues at an annual Dussehra show and has his own band of admirers as a result.

Among them is the sprightly neighbourhood girl Neha (Shriya Pilgaonkar) who uses his cyber cafe to further her dream of flying away to the US.

But Gaurav's ambition is to meet Aryan Khanna in person, so he heads to Mumbai. Once he gets there, harsh reality hits him and he is left bitterly disillusioned.

Something snaps in him, and Gaurav mutates overnight from fan to tormentor, turning Aryan Khanna's life upside down.

Fan has moments that are delightfully well conceived and executed, but the grasp on reality that the screenplay (Habib Faisal) displays in the first half dissipates by the time the film nears its business end.

The desperate acts that Gaurav resorts to with the intention of running Aryan Khanna's career to the ground are overly dramatic and not always convincing.

It is hard to accept that the London police would be so blinkered and incompetent as to blame a popular movie star for the hell raised at Madame Tussauds by an impersonator.

There are several such situations in Fan leading up to the climactic duel between Gaurav and Aryan that need to be taken with a pinch of salt.

But with SRK putting his best foot forward as the indignant fan, the film does not have too many overly dull stretches. This is notwithstanding the fact that the anti-hero does not always manage to make an emotional connect with the audience.

Of nothing else, Fan demonstrates why SRK's appeal is so enduring. Even in a film that has more than its share of flaws and loose ends, he can stitch together a performance that is both riveting and crowd-pleasing.

Watch Fan for Shah Rukh Khan and for a screenplay that throws up quite a few delightful surprises.